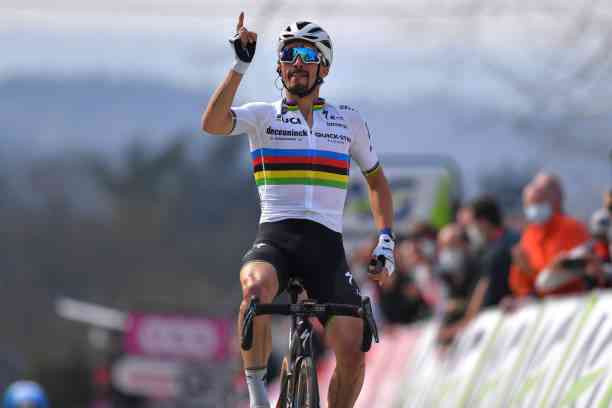 In a bumpy first stage, the Tour de France gave us the 36th victory in the career of Frenchman Julian Alaphilippe.

After 10 long months of waiting, the first stage of the 2021 Tour de France finally took place, which had a bit of everything: The victory of Frenchman Julian Alaphilippe places him as the leader of the competition, although we also saw a couple of serious accidents that marked the course of the day.

Those falls hurt Latino cyclists: Sergio Higuita finished in eighth position and Jhoan Chaves in 11th place. Rigoberto Uran and Nairo Quintana are the great hopes of Colombia, but they went up to 16th and 17th places.

For his part, Richard Carapaz suffered more complications and finished in 23rd place. Other favorites such as Primoz Roglic and Tadej Pogacar closed the stage in third and sixth position.

The unconsciousness of the fans

It is true that sport is not the same when the fans are absent; However, the first stage of the Tour de France was clouded by the irresponsibility of one of them. As there are no fences or divisions between the circuit and its surroundings, anyone can get close to the athletes.

Unfortunately, this is not an isolated event. All the great tours of cycling suffer similar events in almost all their stages, as people want to be on television broadcasts, chase cyclists or touch them to “encourage” them.

This happened in a section of the first circuit, when a fan posed with a poster and caused the fall of countless participants. The images quickly went around the world, as injuries could be significant.

The second accident completely changed the course of the inaugural stage of the Tour de France. When a fall caused dozens of cyclists to fall onto the concrete, and surrounding grass; Alaphilippe managed to dodge the rest, so he escaped alone to the goal.

Grab Between Hamilton And Verstappen And Abandonment Of Raikkonen: What The Portuguese Gp Left