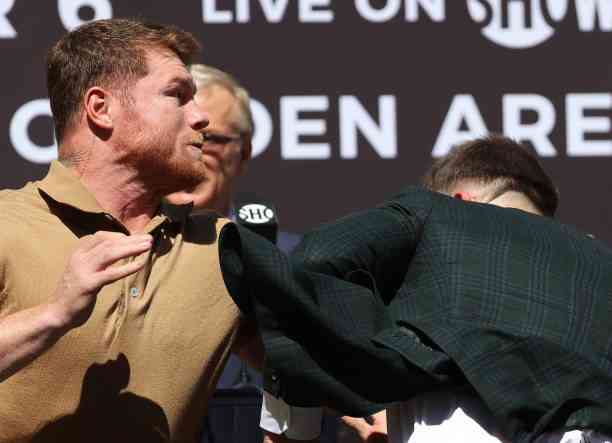 If that’s how the press conference started, the fight will be a show. Canelo Alvarez and Caleb Plant hit the blows in the first confrontation.

On November 6, the fight between Canelo Alvarez and Caleb Plant was agreed, but this September 21, the first press conference was held to promote the fight between the two boxers, and it started warm among the fighters. Now he has put on weight, people.

The press conference had not started yet, and we had the first face to face, they said everything … until Canelo Alvarez pushed his rival very solid, and obviously not, things would not stay that way, because Caleb Plant would approach him and once at the correct distance, the American landed a blow .

Canelo Alvarez with feline agility, took off the blow by showing his rival that he has reflexes and tried to land a blow as well , but security elements and part of the boxers’ equipment arrived to separate them.

From the first instance and after the altercation, it seemed that Caleb Plant had a cut on his right cheekbone, nothing of that was said at the press conference, so it will not be a reason for the fight to be postponed or there is something of consideration.

What did Canelo Alvarez and Caleb Plant say at a press conference?

Tempers calmed down, at least a little to get started with the scheduled event. Caleb Plant was the first to go up to give his statements and announced that he wants to show those who do not trust him for the fight against Canelo Álvarez, that they are wrong.

Where I come from there is no boxing community, there are no other professionals to look up to to be able to say: ‘If he can do it, I can do it.’ This is what I need to get the job done, I have this (pointing to his head) and I have this (pointing to the heart). I don’t do this to be famous, to seek attention because since we started it’s just me and my dad. Nobody believed in us, nobody thought we would be here today,” said Caleb Plant.

But, Canelo was clear and direct at the time to the microphone: “I just want to say something. You are not at my level, and you will see it on November 6. You’re going to know, I promise you, “Alvarez mentioned, looking directly at his opponent.

Manny Pacquiao Announces His Retirement From Boxing, Will Seek Presidency Of The Philippines