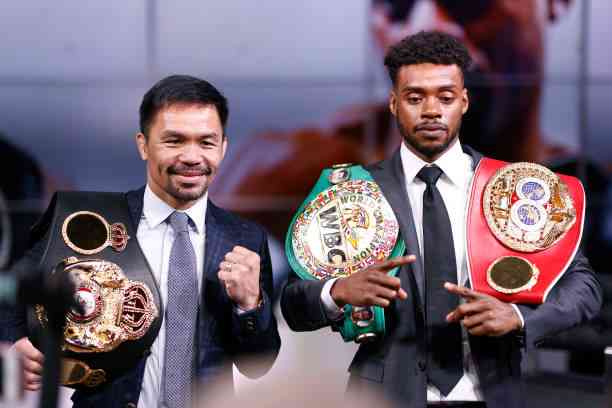 Manny Pacquiao returns to a boxing ring after 2 years of inactivity, he will face the undefeated Errol Spence Jr., and the fight will be on August 21.

The ‘Pac-man returns to a boxing ring – and it is not for an exhibition match or anything like that – after almost two years of professional inactivity. In addition, Manny Pacquiao will not only compete again, but will do so for a championship hat-trick.

Errol Spence Jr. will defend his World Boxing Council and International Boxing Federation welterweight division championships against Manny Pacquiao, but there will be another championship at stake, the vacancy of The Ring magazine.

Next August 21 is the date that both will get into the ring for their fight, and the fight will take place at the T-Mobile Arena located in Las Vegas, Nevada. Both fighters made the fight official with the official confrontation in which both fighters met for the first time.

“There were many opportunities to choose a fight, not an easy one, but a much easier fight compared to Errol Spence. But I decided to choose Errol Spence because I want to give the fans a good fight, I want a real fight. I am a fighter, and boxing is my passion, “said Pacquiao on Fight on Fox.

Who is Errol Spence, Manny Pacquiao’s next rival?

One of the main attractions in professional boxing is Errol Spence, a fighter from Long Island, New York. He has a devastating power that he has demonstrated throughout his career as a professional boxer.

He has a record of 27 fights, all won, and speaking of power, 21 knockouts are what he has to his account. So it is one of the main factors that Manny Pacquiao – who has already been knocked out and asked Juan Manuel Marquez – will have to consider his defense.

Owner of a relentless left hand, who can connect both to the liver area and finish combinations, but without a doubt, he likes to take advantage of the short distance to launch an uppercut that has damaged several opponents in his record.