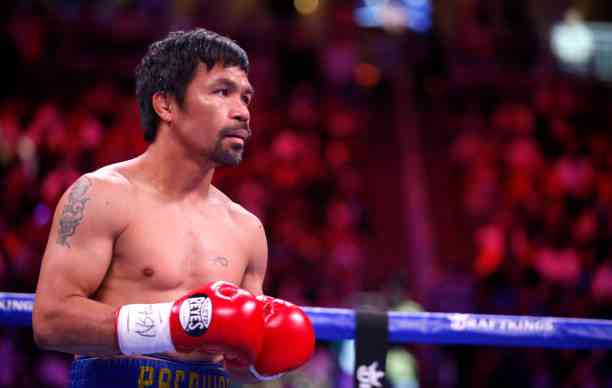 Still in August, Manny Pacquiao stepped into the ring. But it seems that, now, yes, he will hang up his gloves and give priority to his political career.

“Why wasn’t he already retired?” many will be wondering … but, so that there is no doubt, the good Manny Pacquiao does it officially: there will be no more Pac-Man in the ring (he says).

Through his social networks, the Filipino boxer announced his professional retirement. “This is the most difficult decision I have ever made, but I am at peace with it,” he wrote to accompany an emotional video that made David Failtelson run tasty … well, more than video, a mini-documentary: 14 minutes of Manny Pacquiao talking about what boxing is for him and everything that this sport gave him (we understood that, because the video is in Filipino).

“Chase your dreams, work hard and see what happens, ” says Pacquiao as his last piece of advice as a professional boxer.

Pacquiao – 42 years old – is retiring from the box permanently to prioritize his political career. Good timing… since, in fact, Pac-Man has been a senator since 2016 … However, it seems that he will not pay attention to that position, nope. He already wants to climb the ladder: the former world champion will launch to succeed the controversial Rodrigo Duterte; that is, he will seek the presidency of the Philippines.

According to ESPN, Manny Pacquiao has already accepted the candidacy for the presidency that was offered to him by his party, the PDP-Laban. This happened a few days ago, during the national convention of the aforementioned political institute.

Well … let’s see how it goes in politics. If he’s doing half as well as a boxer, he’s done it. Manny Pacquiao was a champion in eight divisions (Fly, Super Bantamweight, Feather, Super Feather, Lightweight, Superlightweight, Welterweight, and Super Welterweight) and already has an assured place in the Boxing Hall of Fame.

Manny Pacquiao, the “exterminator of Mexicans”

Although in the rest of the world he is remembered for his championships or for his fights with Floyd Mayweather, here in Mexico, he will be remembered for having refined tremendous grabs with, perhaps, the best national boxers of recent years: Marco Antonio Barrera, Erik Morales, Oscar Larios, David Diaz, Oscar de la Hoya, and, of course, Juan Manuel Márquez, with whom he faced four times.

After a draw and two victories in favor of Pacquiao (by decision), Dinamita sent Pacquiao to the canvas with a strong right hand. For many, the tremendous knockout of Juan Manuel Márquez marked the end of the Filipino’s career, and if not, at least it was the beginning of the end, which is definitive until almost nine years later.