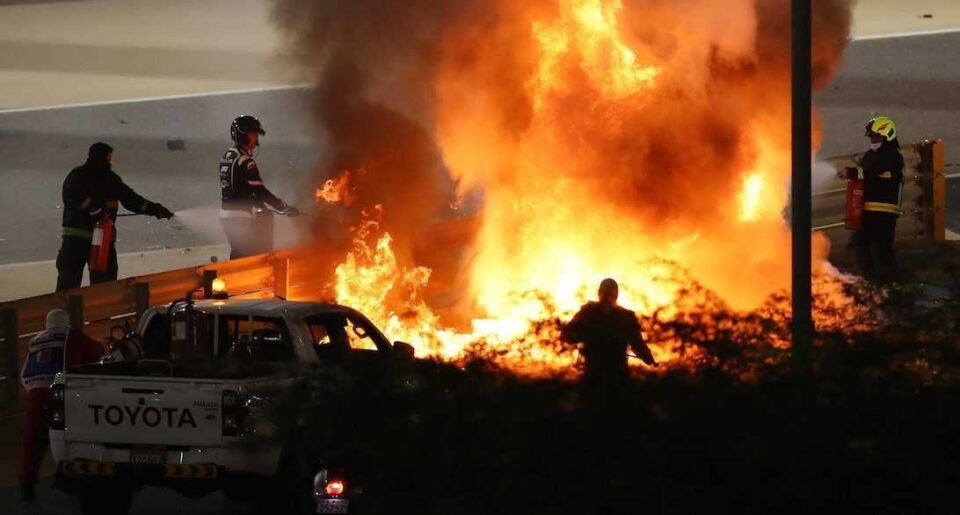 The FIA ​​concluded investigations into Romain Grosjean’s accident at the Bahrain Grand Prix in November 2020.

On November 29, the Bahrain Grand Prix had to be suspended for almost an hour after the spectacular accident of Romain Grosjean, who saved his life thanks to the safety halo and a quick reaction from the pilot himself, who came out of the flames to be assisted by paramedics.

Since then, the International Automobile Federation (FIA) had taken on the task of investigating the causes of the accident. After a wait of more than three months, the report was concluded, which is now public.

What does the report say about Grosjean?

The FIA ​​indicates that the accident originated after exiting the third corner and Grosjean (Haas) car was going 240 kilometers per hour when the rear wheel on the right side touched the left rear tire of Daniil Kvyat (Alpha Tauri).

The contact caused Grosjean’s car to lift from the rear, causing French to lose control of the car and drive off the track on his right side. The Haas pilot hit 192 kilometers per hour at an angle of 29 degrees, “with an estimated deviation of 22 degrees in the direction of travel and a maximum resultant force equivalent to 67 G.”

How was the fire rose?

The impact caused the containment barrier to deform, which represents a failure in the circuit’s safety measures, so the front of the car pierced the rails, which caused the car to split in two.

The car’s separation caused the “safety bladder”, which is the connection to the fuel tank, to detach, which caused the fire.

“The fuel tank inspection hatch on the left side of the chassis came off, and the engine fuel supply connection was ripped from the fuel tank safety bladder; both provide primary avenues for fuel to escape from the tank,” the report says.

Grosjean got caught for a few seconds

Once the car was finally able to stop, and after the start of the fire, Grosjean’s left foot was trapped, so the driver could only get out of the car by leaving his boot inside the car, for which he suffered burns on the car.

The medical service arrived at the scene in just 11 seconds, and Grosjean left the scene of the accident 16 seconds later.