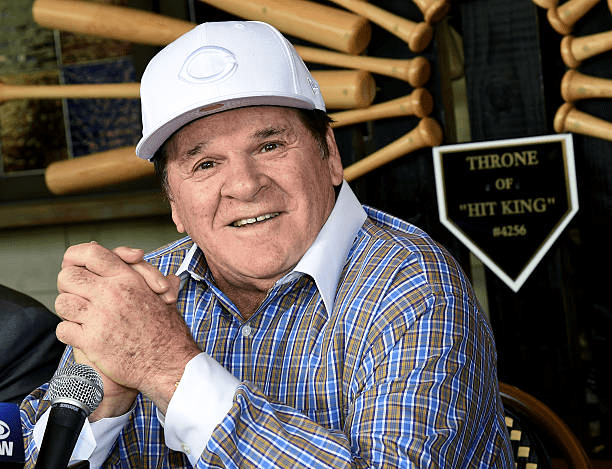 Pete Rose took advantage of his knowledge in sports betting to launch his podcast, although the same bets took him away from baseball.

Pete Rose is one of the greatest baseball figures in history, he has legendary status, but unfortunately his life outside the diamond does not let him be in the Cooperstown Hall of Fame, as he is blocked due to sports betting.

But let’s go back a little bit in time, on August 23, 1989, Pete Rose was expelled from baseball as punishment for gambling on the sport. At the time, Pete was the manager of the Cincinnati Reds and agreed to a deal that included a lifetime ban from baseball.

That is why Pete Rose cannot work on any major league team, and he will not be eligible to enter the Hall of Fame, although there are currently many debates about whether to forgive the player and give him a second chance, it has not been successful.

After leaving baseball, Pete Rose has remained active in the world of sports, although away from sports, he has had a few appearances in WWE, in fact, if he could not enter the Baseball Hall of Fame, he could act in wrestling.

If Pete Rose is an expert in something, it is in baseball and sports betting, as he was accused of in 1989, but he had been in the betting world for more than a decade, and in 2021, he has to take advantage of that aspect to launch a new podcast.

A former MLB player, he leveraged his gambling knowledge to partner with Quake Media and create the “Pete Rose Daily Picks” podcast, in which he is dedicated to bringing betting advice to all who choose to listen, an authoritative voice.

In a salvaged TMZ video, Pete Rose mentioned: “I’ll share my thoughts about the games with Ben and the fans, then we can watch and learn together. There are some ideas, I think, that only an old man like me can weigh. I’m excited to share more winning predictions with my fans.”

The expert voice of the former MLB player

Although he will not only give advice on baseball but on various sports and already gave some samples of his high knowledge in sports because in the same video that TMZ released, he gave a pick so that the fans could take advantage and it was one in favor of the Rams.

He put the pick 2.5 points behind the Rams in Thursday night’s game against the Seattle Seahawks and what happened was that the Los Angeles team beat the “Seahawks” 26-17, so that Pete’s advice was winning and straightforward to collect for those who followed his advice.

A Pillar’s 94 Mph Pitch Against The Braves