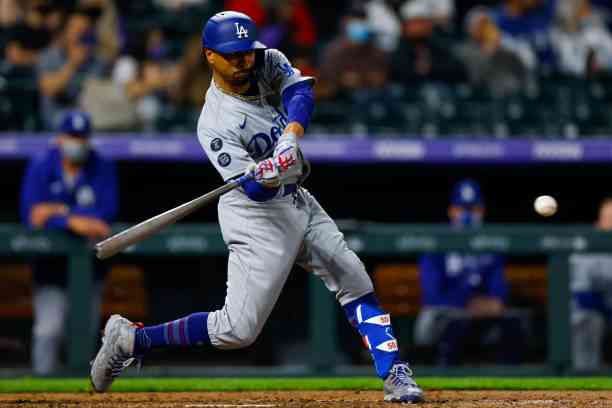 Success story! Mookie Betts was about to leave baseball, but his mother always supported him, and now he shines with the Dodgers.

Regardless of who the opponent is or the difficulty of a play, Mookie Betts guarantees safety in the right field. So far into the 2021 MLB season, this has been more than proven.

At bat and defense, he is one of the most important pieces in the ninth commanded by coach Dave Roberts. However, he was about to give up his dream of being a baseball player when he was little, and the person who saved this story is Diana Collins, his mother.

His mother opened the doors to baseball

He is now one of the most important figures in Los Angeles and the entire MLB, but his path to professionalism was not easy. At a Dodgers Foundation event, the outfielder’s mother revealed that obstacles appeared since he was a child.

When Mookie Betts was 5 years old, no team wanted to host him because he was so small, with short legs and arms. After several rejections, Diana Collins made a decision that changed their lives: she became a baseball coach, formed her own novel and opened the doors to children who were not accepted elsewhere.

The results of that squad in a children’s league in Nashville, Tennessee, were not as expected. However, it represented the first steps of Betts in the King of Sports, and curiously, they did defeat one of the teams that rejected him long before.

In 2011, Mookie Betts was selected in the fifth round by the Boston Red Sox. Consequently, he declined to play at the college level with the Tennessee Volunteers and spent nearly 3 years on teams like the Salem Red Sox, Surprise Saguaros, and Pawtucket Red Sox.

Finally, his major league debut came in June 2014, in August, he debuted with a Grand Slam and attracted more attention because he was only 21 years old. Two years later, he was selected for the All-Star Game and came close to taking the MVP of the American League.

His first World Series title also came with the Red Sox in 2018. Interestingly, he faced the Dodgers, who fell 4-1: Betts hit a home run in the fifth and final game that propelled their team to the victory.

Despite his great characteristics and the 135 races he scored in the 2019 season, his contract was not renewed the following year. A new opportunity was in Los Angeles; his contract was signed on July 22, 2020, for 365 million dollars and 12 years.

In his first season with the Dodgers, Mookie Betts had 47 runs scored, 39 RBIs, 16 home runs and 10 stolen bases. All of this helped them win the Fall Classic against the Tampa Bay Rays.

Although we all know him as Mookie Betts, this is just a nickname. The player’s real name is Markus Lynn Betts, and a curious fact is that if you put his initials together, you will get the initials of the MLB.

The nickname refers to former basketball player Mookie Blaylock, as his parents closely followed his career. As if that were not enough, it is also a tribute to one of his aunts, who is nicknamed Cookie.