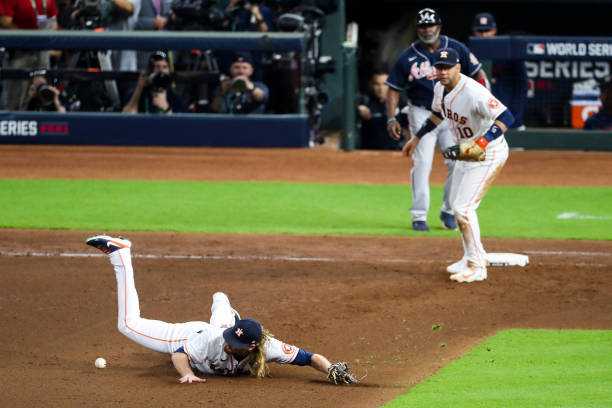 The first game of the World Series was played, and the Braves took advantage of Charlie Morton’s bravery and the mistake of Ryne Stanek.

Play Ball! He officially started the World Series in 2021 with a duel between the Houston Astros and the Atlanta Braves. The Minute Maid Park home of the American conference saw their team succumb to some Braves who came out very ditto.

The truth is that it was not an easy game for the Astros, because in the first three innings, the Braves hit them with everything and without mercy. Two home runs and five runs for Atlanta, sentenced the first game of the World Series.

The game ended 6-2 in favor of the Braves, who already started the series with an advantage by winning away, and this Wednesday, October 27, game two of the ‘Fall Classic’ will also be experienced at Minute Maid Park, home of Los Astros before traveling to Atlanta for Game 3 of the World Series on Friday, October 29.

Moments from Game 1 of the World Series

Charlie Morton and his act of valor

Braves pitcher Charlie Morton gave us one of the game’s best moments, though maybe not for him. In the second inning, he was located on the mound to face Yuli Gurriel. The batter hit the pitch and hit a streak aimed at the Atlanta pitcher.

The ball hit one of his legs, but the ball came close to first base to make the Out. Unfortunately, that pitch caused a fibula fracture in his right leg, but instead of leaving the game, he continued until the third inning, and with everything and a broken leg, he had the ability to strike out José Altuve, a walking danger.

After the fracture, he still had the strength to make three out with the FRACTURE OF THE Fibula, but every heroic action has its price, and the one that Charlie Morton and the Braves will have to pay will be high, since the pitcher is out of the World Series and will return. until 2022.

Cuba present with a lot of power at bat

The Braves had it clear, if they wanted to win, they had to hit hard and fast, and they did. Just to start the first inning of the World Series, Jorge Soler took his turn at bat and faced Framber Valdez on the mound and not only beat him, but showed his power.

To open the inning and only after three pitches, the Dominican Republic pitcher watched as the ball he pitched was going in the direction of Home Run. It was something that did not bode well for the Braves, as the first hitter, and takes it out of the park.

When you’re not on the diamond, you just don’t work, and unfortunately for the Astros, it was a nightmare night in every way and even more painful, which was in game 1 of the World Series, they already started off on the wrong foot.

Ryne Stanek was one of the relief pitchers who promised to get the potatoes out of the fire for Astros, but he also didn’t come in fully focused on the game and had a primary error on the diamond. Things were already 5-1 against him, and in inning 8 Stanek faced Jorge Soler.

Again Soler, hit a hit as he wanted and no, which seemed easy, but neither Stanek nor the Brave’s first baseman understood each other, and neither went for the ball for the Out (talk). And when Ryne reacted, he tried to go for the ball, but slipped and stumbled without being able to catch the ball.

It was a nightmare for the Astros, and to top it off, he left a Braves player in the anteroom thanks to that action, and it would become the last race for Atlanta in game 1 of the World Series.