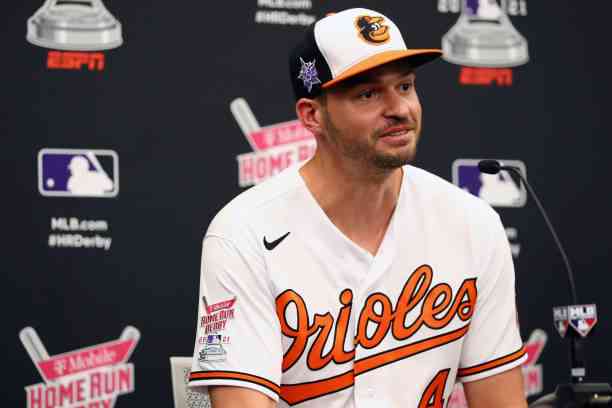 After a complicated year with cancer diagnosis included, Trey Mancini shone in the MLB HR Derby and won several ovations.

As of April 2020, Trey Mancini had to move away from baseball, MLB, and his great passion for the sport. Doctors diagnosed him with colon cancer. And after several months with the disease, he managed to recover until he returned to what he knew as a normal life as a military man in the Baltimore Orioles.

What seemed impossible a year ago is now a reality. The outfielder and also first baseman returned to the Major Leagues better than ever, he entered the Home Run Derby, and although he lost the Final against Pete Alonso, he fulfilled one more goal in his career.

That is why the image of the celebration between Trey Mancini and his girlfriend Sara Perlman is so special. She was one of the player’s great supporters during cancer treatment, and now they can celebrate another finished battle.

The player shared his diagnosis in April 2020. In a letter published in The Players Tribune, she explained her absence from Spring Training: “I was just getting tired after a couple of swings. I knew something was happening, but I never thought it was something really serious.”

As the medical tests progressed, the possibility of colon cancer appeared. After weeks of uncertainty, Trey Mancini received the news that it was indeed this disease and had to start chemotherapy sessions on April 13.

The tumor had blocked the entire colon, so it was removed by the doctors before. However, the fight was just beginning, and the first baseman had to face another complication: sessions in times of pandemic. The measures implemented in the face of COVID-19 caused him to go to treatment without company.

Meanwhile, baseball and the major leagues returned to activity without his presence. For 6 months, Mancini entered chemotherapy, hoping to return to the diamond and enjoy the passion he has had since he was a child. Fortunately, this moment approached thanks to the effectiveness of the medicine.

As 2020 progressed, the hopes of the baseball player and all his loved ones also returned. At the end of the year, he ensured that he would train in the first months of 2021 to prepare and finally consummated his return at the beginning of the season. In addition to days after that letter was one year old, Trey Mancini played at Oriole Park, home of Baltimore, to the ovation and support of thousands of fans.

Trey Mancini’s long-awaited return to the Major Leagues has been very productive. In the middle of the midseason break, he had 324 at-bats, 83 hits, 48 ​​runs, 16 home runs, and 55 RBIs.

Of course, those stats led him to the Home Run Derby. The mission was not easy, but in the first round, he eliminated Matt Olson and advanced to the semifinal against Trevor Story. Once in the Final, he faced favorite Pete Alonso, and although he couldn’t win, he hit 59 home runs during the day.

Meet Bronxie, The Turtle Who Became The Yankees’ Charm In MLB