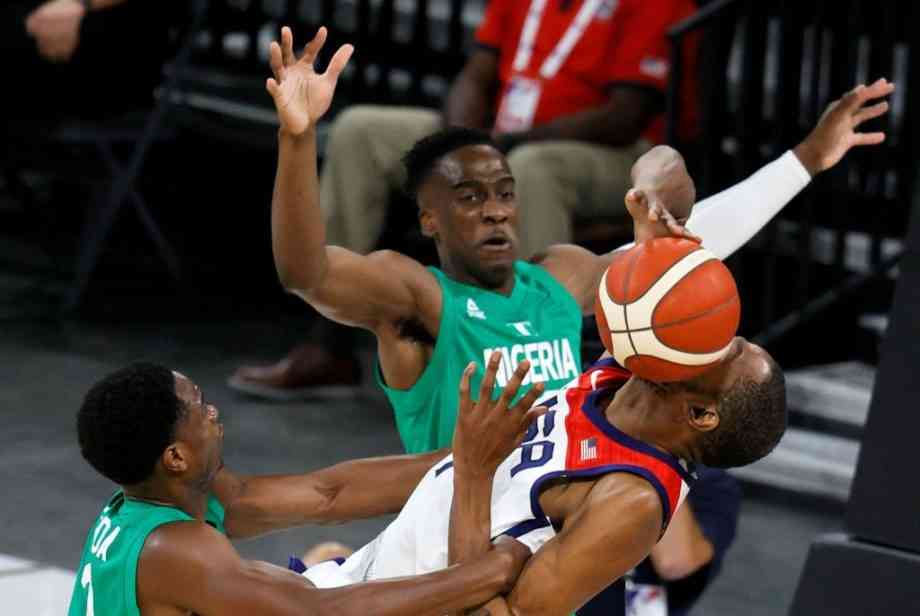 The United States, with everything and Kevin Durant, Kevin Love, Draymond Green, and Jayson Tatum was overtaken by Nigeria, which they humiliated in London 2012.

The United States is the undisputed favorite to win the gold medal at the Tokyo Olympics, even though players like LeBron James and Steph Curry chose not to attend. Kevin Durant, Draymond Green, Jayson Tatum, and Kevin Love are the main figures of the quintet to secure the gold medal, but before leaving for Japan, they were in for a surprise.

Nigeria gave the bell by winning 90-87 in a preparation match for both teams that qualified for the Olympic Games with a great performance by Gabe Vincent, Miami Heat player, who invites us to reflect with these three points on the defeat of the United States.

Nigeria hit 20 triples and has a physical game

Nigeria gave a taste of what it will be like at the Tokyo Olympics with a style similar to that of the current NBA, that is, many triples. Against the United States, they found 20 of 42 3-pointers, of which Vincent hit six.

“The Nigerian team played very physically, did a great job in that regard, and scored a lot of 3-pointers,” acknowledged United States coach Gregg Popovich.

The evolution of Nigerian basketball

At the 2012 London Olympics, the United States reached an Olympic record by beating Nigeria 156-87. Neither team had achieved a difference of 83 points on the board. That humiliation of the team of Kobe Bryant, LeBron James, and Kevin Durant marked a watershed for Nigeria, which began a process to restructure its basketball.

His program brought several players to the NBA, so currently, eight of those selected to the Olympics already have experience in the best league in the world. His coach, Mike Brown, has also added style, having worked with Steve Kerr as an assistant coach for the Golden State Warriors.

“Mike has done a great job with us so far. We have had a great camp so far. We had to build a new culture, start from scratch, new plays, everything new. We have a lot of new guys,” Vincent mentioned of Brown, who was named the African team coach in February 2020.

The United States is not complete yet

If logic prevails, Nigeria will play the United States again in Tokyo in the knockout stages, and a bad day could cause failure against a team that has bet heavily on basketball.

However, it must be remembered that the US squad is not complete. Davin Booker, Khris Middleton, and Jrue Holiday, who are playing in the finals between the Phoenix Suns and the Milwaukee Bucks, are yet to join.

After the final series is resolved, the players will join the American team and will be important weapons for the benefit of Popovich’s team.

Comfortable Wins For Nets And Lakers Against Fragile Rivals