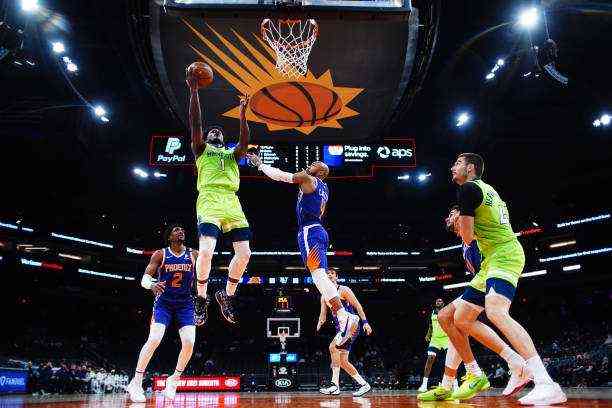 The rookie Anthony Edwards and the Dominican Karl-Anthony Towns made a huge cloud that left the Suns dull, that cloud was made of high-carat offensive basketball and was encrypted in a wild 83-point score that served to surprise Minnesota by winning 119-123.

Edwards had 42 points and Towns 41 in an extraordinary dual performance that left Phoenix in the dark. The second time in franchise history, two players have scored 40 or more points in the same game.

The rookie made his best professional scoring and became the third-youngest player to reach 40 points in NBA history. The 19-year-old, number 1 in the draft, went to 42 points, 7 rebounds, and 3 assists after presenting a series of 15 of 31 on the field goal and 4 of 13 from the triple. He added 9 points in the final quarter.

We are facing a player of immense quality, a player who can grow in these Timberwolves. He still lacks reading of the game and that many times he sins of absorbing a lot of look at the basket and little at his teammates, but that personal blindness is going to be removed with age almost certainly. Very interesting Edwards, very much.

Actually, the best local player was Towns, with Edwards’s permission, of course. Dominican offensive basketball chair. Essential in all respects. He added 41 points, 10 rebounds and 8 assists, made 15 of his 24 shots from the field and 5 of his 7 triples, his efficiency was enormous, and he contributed 11 points to his team in the fourth quarter. Towns begins to be the oldest Towns of past seasons. In attack there is more than enough.

Between the two they added 83 of their team’s 123 points (they had 41 of the 53 scored by Minnesota at halftime) and threw 55 of the 93 field goals attempted by their squad.

Minnesota won 119-123 to go 3-2 in March. The team is growing despite playing without two of its most prolific scorers, D’Angelo Russell and Malik Beasley. Chris Finch appears to be doing a sober and conscientious job in the locker room and the track. It is true that the Timberwolves have had to play 41 games to win 10, but it is no less true that Minneapolis is beginning to see some light on the horizon.

The Spaniards of Wolves

It was a special game for the two Spanish Minnesota Timberwolves players. For Juancho Hernangómez because he performed very well on the court and for Ricky Rubio because he was visiting Phoenix for the first time since leaving the team.

Rubio (6 points, 5 assists, and 3 steals in 29 minutes) had already played against the Suns, but in Minneapolis on February 28 with a loss for his team. Today the tribute of winning has been given in the state of Arizona. And tomorrow, this Suns-Timberwolves will be repeated in the second game in 24 hours played in Phoenix.

Juancho had 14 points, 5 rebounds and 2 steals in 22 minutes. He was the team’s third scorer and achieved a very important dunk in the game’s last seconds.

Score of 119-121 for Minnesota and ball on the wing with 5.9 seconds to play. Play prepared, or at least it seemed so, and Rubio assisted from the throw-in for Juancho’s mate that puts the final 119-123. Perfect connection.

Phoenix had Devin Booker on 35 points and 6 assists. Chris Paul added 17 points and 4 steals, Mikal Bridges added 17 plus 8 assists and Deandre Ayton, who ended up eliminated by fouls, finished with 14 points and 7 rebounds, again falling short of the game.

Their 22 turnovers killed the Suns – Minnesota aggressively defended the passing lanes – and the 70 points they conceded in the second half. Hard defeat for Monty Williams’ men.

Boston Celtics Won’t Include Jaylen Brown In Any Trade