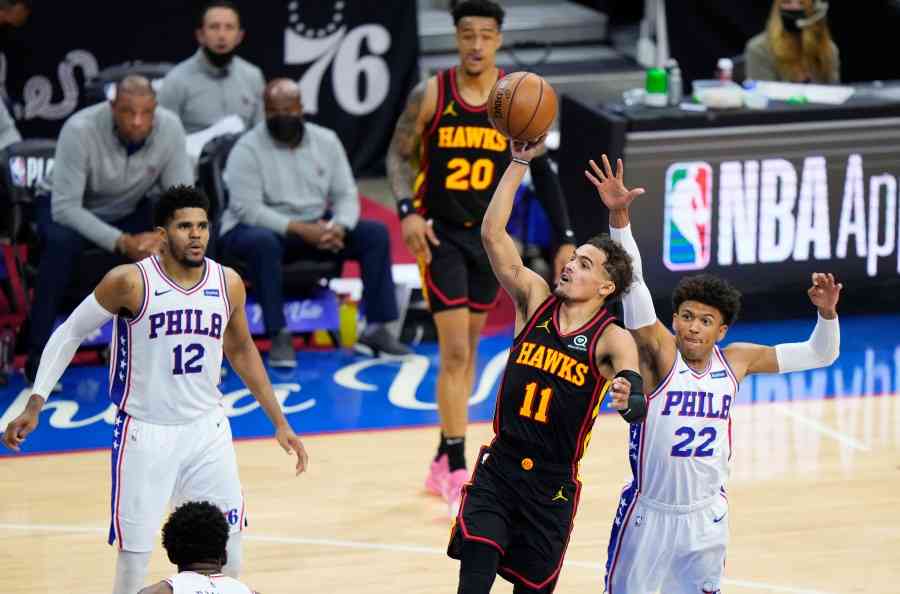 Conference Finals without the first from the East and the first from the West. Utah Jazz fell first, and today the Philadelphia 76ers did. Atlanta Hawks will play the Eastern Finals against the Milwaukee Bucks starting Wednesday.

Hit on the table by a young team loaded with talent. Nate McMillan’s little big miracle. It started with a few Hawks out of the playoffs, and now they are in the conference finals. Under the undisputed leadership of Trae Young. With a great seventh game from Kevin Huerter.

96-103 win in Philadelphia to make history. The Hawks had never won a Game 7 playing out (0-9 mark). Today they have. And after winning 3 games in Philadelphia, they will fight for the title in the East. They are their second conference finals in 50 years! The previous ones were played in 2015.

The Sixers Trial mortally wounded. They seemed to get to the end of it successfully. First place in the regular season. But the playoffs have been a pit of cold water. Three losses at home to Atlanta. Two games lost after dominating by 26 and 17 points. Ben Simmons pointed out by all. A star fell to the ground. A dull star. A star living very hard times. Today, a new disappearance is facing the hoop. He defended, he assisted, but it was a non-existent element in the score. Hawks didn’t even need to hack it. He just eliminated himself. The last straw came 3 and a half minutes from the end. He was left alone under the hoop and he passed the ball! One player was destroyed.

In the antipodes, the young Kevin Huerter. What a way to play the seventh match! He had 27 points and 7 rebounds. And it turned out to be crucial in the end. With 92-93 in favor of the Hawks, he had 3 free games. There were 54 seconds left. He hit all 3. With the pulse of a veteran champion. The rest was done by Danilo Gallinari. He touched the ball in a steal for Huerter himself, and he returned it in a long pass for the mate. The Italian’s dunk definitely silenced the Sixers fans. Live funeral for Doc Rivers year one.

Today’s game speaks of the mental strength and quality of these hawks. Atlanta was able to win by missing its first 9 shots in the fourth quarter. Atlanta emerged triumphantly on an erratic Trae Young night. Without the real Bogdan Bogdanovic on the track. And playing, let’s not forget, without Cam Reddish and without De’Andre Hunter .

The best of Atlanta, the aforementioned Huerter and John Collins . Collins had 14 points and 16 rebounds. He fought well. And Trae Young. Little Young is essential even when he is bad. He added 21 points and 10 assists. Some of those assists were true works of art. But … 1 of 12 on the field in the first half and at the end of the game 5 of 23 with 2 of 11 from the triple and 6 turnovers! Erratic for being fine. Clint Capela was when Young wanted it to be. Not much more. But Huerter, Collins, and Gallinari worked. The Italian scored 17 points. Leadership in the band and on the track.

The match was even from start to finish. The maximum advantage in the whole night was 7 points. Many command changes on the scoreboard. Little weight of the triple in the game. Equality in the rebound. But the Sixers lost 17 balls, a bloodbath.

Joel Embiid’s fight wasn’t enough. It has not been in physical fullness. Despite this, 31 points and 11 rebounds. Of course, 8 turnovers. He has reached where his body has reached. Tobias Harris gave the face (24 points and 14 rebounds, but 8 of 24 in the shot). The great Seth Curry was useful again (16 points with 60% from the field goal). And he had no bad minutes for Matisse Thybulle. But there it was all over. With Simmons (8 rebounds and 13 assists) making 5 points with 2 of 4 on the shot. It is no longer just avoiding a simple jump shot from medium and long distance. It is no longer penetrated. It is true that he defended at a great level. But a player who wants to be a reference star cannot shoot 4 shots. And less in a seventh and final game. Eaten by pressure. His future at Sixers in question.

These Hawks perform without pressure in the Eastern Finals. With all the objectives more than fulfilled. And that will make them doubly dangerous. The Knicks and Sixers were his victims. Now it will be their turn to face the Antetokounmpo Bucks.