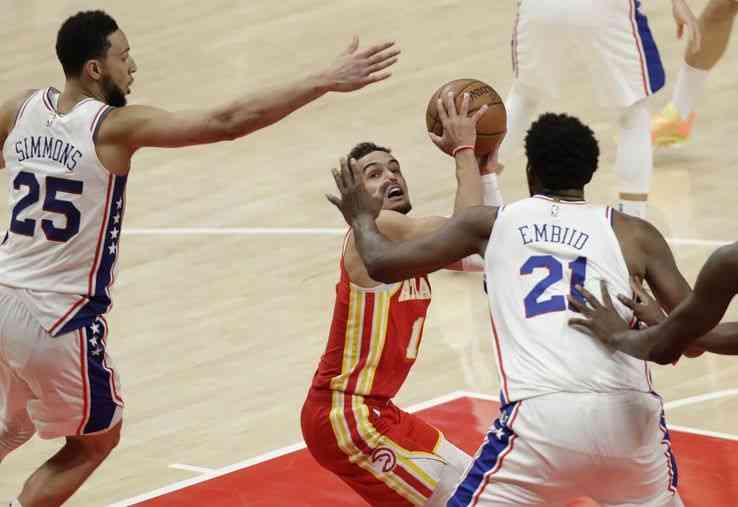 Hawks prevail 106-109 after another comeback with Trae Young in front and is 2-3. The sixers’ attack comes down to Embiid and Curry; horrible Simmons and Harris match.

It happened again. Another sinking of the Sixers in the second half and another prodigious comeback by the Hawks. In the fourth game of the series Atlanta came back 18 points behind, today, it has overcome a deficiency of 26 points in the fifth.

Trae Young led another display of faith from Nate McMillan’s team, which was able to rally 18 points in the fourth quarter with a scandalous 19-40 run, highlighting the catastrophic collapse of the hosts in both attack and defense, one of the great flags of your project.

Atlanta had Trae Young as a great protagonist with 39 points, 7 assists, 3 steals, and only 2 losses. The visiting leader went to free practice 19 times, spent 40 minutes on the court, scored 13 points in the decisive final quarter, and with veteran Lou Williams constituted a double battering ram in the final stretch of the match that ended with a pitiful Sixers.

Suffice it to say that between Young (13 points) and Lou Williams (12) they scored more points in the fourth quarter, 25, than the entire Sixers team, 19, a team that collapsed to the point where Joel Embiid, their great battleship, a battleship whose physique was logically less as the meeting progressed, missed 2 free games and practically definitive with 10.9 seconds remaining to finish. There the local ordeal reached its climax.

The Sixers lost 8 balls in the third quarter and still survived comfortably at the end of the period (87-69), but in the last, they signed a 5 of 17 in the shot, being mortally wounded throughout the game for their atrocious performance from the free throw (15 missed shots) due to the recurring nightmare of Ben Simmons, who already began to do the Hack-a-Simmons from the second quarter and who finished 4 of 14 from the free kick.

They defined Trae Young and Danilo Gallinari in the moment of truth with a fantastic triple with 51.7 seconds left, and Atlanta survived the bad offensive games of Bogdan Bogdanovic, Kevin Huerter, and Clint Capela because in the second half, the team did a fantastic job defensively after losing 62-40 in the first and going down 26 points (62-36).

In addition to Young, 19 points and 11 rebounds from a great John Collins, 16 points and 8 sacks from Gallinari, and 15 points in 23 minutes from the resurgent Lou Williams.

The local attack was a spectacular dialogue between Joel Embiid (37 points, 13 rebounds, 5 assists and 4 blocks) and Seth Curry, who played Stephen Curry with 36 points, 7 rebounds, 13 of 19 in the field goal and 7 triples. scored -fantastic postseason-. The rest, to see them come, without anyone reaching even 10 points.

Special mention for the personal shipwrecks of Tobias Harris and Ben Simmons. The first can only be said that he was invisible despite playing almost 40 minutes. He had 4 points in the whole game with 2 of 11 in the shot.

Of the second, it is worth highlighting his nth ridiculous from free practice (4 of 14), a situation that makes him retreat in the attack game. Simmons (8 points and 9 assists) disappeared again in the second half as it was made unplayable due to his fear and that of his team to go to the free throws, which caused the ball to pass through his hands barely. It’s a shame that a player with such potential has fallen into such a black hole.

Atlanta’s brutal comeback left the fantastic first half of the Sixers in oblivion, who hit Atlanta a real basketball bath: 38-24 in the first quarter with 80% from the field goal and 17 points with 8 of 8 on Embiid’s shot and 62-40 at halftime with 24 points and 10 rebounds from the Cameroonian, truly unstoppable at the time.

The third quarter marked a change of defensive trend for Hawks, much better in the pressure on the ball and the passing lanes, and the last quarter was a real hell for the Sixers, whose coach, Doc Rivers, is going to have to make him watch it too.

The truth is that after the two comebacks of Hawks, Atlanta dominates the series 2-3 and has a disappointing Sixers on the ropes.