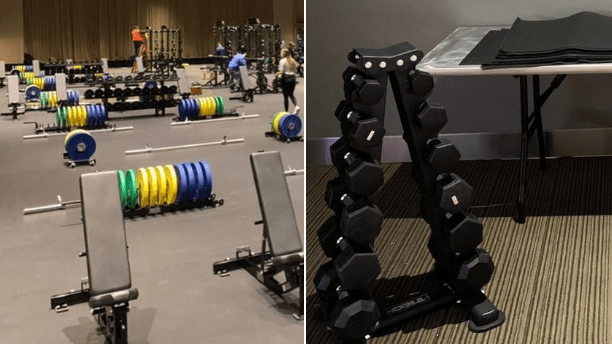 The basketball players denounced unequal treatment and conditions prior to the NCAA March Madness, one of the tournaments with the longest history and relevance to college sports.

And no, we are not going to talk about salaries, but about the tools that athletes receive. The NCAA was shown to differentiate between its men’s and women’s teams through various social media posts.

The United States claims to be one of the countries with the greatest support for sport regardless of gender. However, this event left a lot to be desired from before it started, and the players took it upon themselves to bring it to light.

In addition, it was announced that the NCAA planned activities with the players, such as makeup and hairstyle tutorials, which have little to do with their growth or development on the court.

The first images that circulated on the internet were those of gyms. The uneven conditions are present from space to the equipment that the organizers provided to March Madness’s squads.

The men’s team has a well-equipped gym: a variety of exercise equipment, different sizes for the weights, and the possibility of training as if they were in their own facilities.

For their part, women’s teams have to settle for 6 pairs of weights. All the same squad players have to take turns or find a way to use them, since obviously they were not given enough material.

Hours later, the comparison of the kits that each player received, with those that they received, appeared. The men’s looks very complete: personalized items for the event, deodorants, creams, and even products to disinfect.

Those of the basketball players are very small and nothing like that . The shirts, hats, or socks are generic of the NCAA, they do not stand out for showing off the March Madness logo; In addition, the number of personal items is reduced to 6.

What is March Madness?

It is an annual tournament that, as its name suggests, is held every March. Its first edition took place in the 1981-82 season, and it has grown a lot in popularity.

The competition begins with the classification of 64 teams, of which half are automatically ticketed upon winning their conference. Afterwards, the March Madness is divided into regional tournaments and from then on, the heads of series emerge.

ESPN has owned the broadcast rights for this event since 2003, regardless of whether the games are men’s or women’s. This year, March Madness takes place from March 18 to April 5 in Texas, in cities like Austin and San Marcos, and its final phase will move to San Antonio.