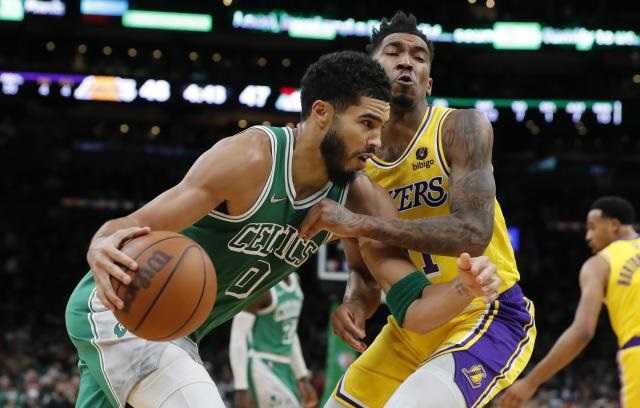 Lakers do another ghostly exercise on defense and are 8-9 negative.

Boston Celtics portrayed the Lakers in the second half (70-47). The Los Angeles team returned to provide a ghostly exercise in defense to lose 130-102 against the Celtics who felt the best energy of Jayson Tatum and the power of luxury secondary such as Marcus Smart, Dennis Schröder, and Al Horford.

Sad return of LeBron James in the collective matter. The one from Akron returned after missing 8 games due to an abdominal injury, 8 games in which his team only won 3, but his return has not been the panacea. It is clear that LeBron is still a top player in the NBA, but that he is no longer at almost 37 years old to pull the magic wand at will.

Boston allowed itself the luxury of scoring 130 points, 70 in the second half and 37 in the final quarter! Lakers continues to be determined to give life to all their rivals from their null defensive commitment. It is a horror to see these Lakers defend, who in 17 games have conceded almost 2,000 points, placing their number of points received in this start of the campaign as their second-worst in the last 40 years, and this defensive insufficiency was seen from the beginning by the actual making of the template.

A resounding victory for Ime Udoka’s team , which managed to balance its season (8-8) and unbalance that of its greatest historical rival (8-9) in a game that measured the two most successful franchises in the NBA, but also two teams that they have started this season in a gray way and that they needed a great triumph to relocate, and the local team obtained that great triumph.

Tatum added 37 points (scoring only 3 in the first quarter), 11 rebounds and 3 steals, took 26 shots being 50% correct and was vital when channeling Boston’s offensive game, which came to the game with casualties deeper ( Jaylen Brown and Robert Williams III ) than the rival ( Kendrick Nunn, Trevor Ariza and Austin Reaves ).

While Smart, magnificent all night, went to 22 points, 8 rebounds and 6 assists, Schröder, especially motivated before his former team, finished with 21 points and 6 assists and Horford, splendid in his effort on both sides of the court, signed 18 points, 4 rebounds and 4 assists in 32 minutes. All three were above 50% on the field goal.

Josh Richardson added 15 points from a second unit in which former Mavericks Enes Kanter and Romeo Langford had very positive sets for their team.

Aaron Nesmith was left for the inconsequential minutes and the loose marker allowed Juancho Hernangómez to play 4 minutes.

Lakers were Anthony Davi s (31 points and 3 blocks), who broke Boston in the first quarter, and LeBron James (23 points in 32 minutes with 10 of 16 on the shot). Beyond them, little or nothing. Maybe some streaks in Carmelo Anthony’s shot and the start of the last quarter by a Russell Westbrook that, otherwise, had a very gray game.

But almost the worst was in secondary school, quite the opposite of what happened with Boston. Special disappearance of Talen Horton-Tucker, who after two splendid games faded badly (2 points and 0 of 6 in shooting). Nor did Wayne Ellington and Rajon Rondo contribute anything, as Dwight Howard did not, beyond their numbers.

Vogel does not find solutions and the rivals go over the team. The Celtics pressed on defense from the second quarter and the Laker’s attack fell silent after a points binge in the first 12 minutes.

You could see it coming. The Angelenos had offered very few positive clues against teams without pedigree and raised the level of the rivals – Bulls, Bucks and Celtics – they have come 3 losses in a row by 18, 7 and 22, despite the fact that Milwaukee and Boston are not at their best moment precisely.

The party existed until its intermission. It was reached with 60-61 at halftime, and then the fourth key, the third, a fourth that started with an 8-0 for Boston, with a great start from Smart, and in which the locals came to put with 14 of advantage, finishing it with 93-82 in his favor after leaving the Lakers in 21 points.

The last quarter left us already the visiting debacle. The intensity that the game had offered in the first half became a monologue. Tight control of the situation by Celtics, who threw 20 free games in the final quarter. And the sinking of the Lakers, without defense, without a good job at the time of closing the rebound, without reaction capacity, being carried away to 20 down with Horford free.

In the final stretch, with the stars already in the band, a triple by Enes Kanter responded with a triple by Dwight Howard, a double and unequivocal sign that the game lacked tension because it was over. The Turk’s triple put Boston with a 25 advantage, the maximum of the game, ending the night with a resounding 130-108 that once again leaves the Lakers in evidence.

Nets Dominate In Durant’s First Game Against The Warriors

D’Angelo Russell Shines On His Return After Missing 26 Games