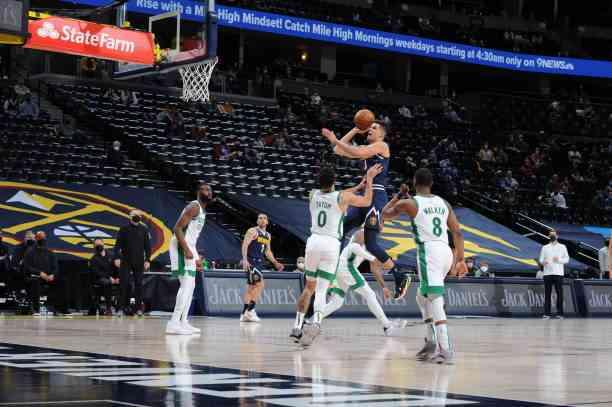 Tatum and Brown lead Boston, Campazzo makes a great game, and Jokic ends up unhinged. Brutal recovery for the Celtics with a 3-31 run in 10 and a half minutes of play.

Boston Celtics are beginning to get used to going through hell and ascending to heaven at the same rate that is played in this NBA. Today it happened again, and Brad Stevens’ team went from losing by 14 in Denver to ending up winning the game by 18.

Denver’s amazing disappearance in attack for 10 minutes with Boston mercilessly sweeping one of the fitter teams to win 87-105 with 28 points and 10 rebounds from Jayson Tatum, 20 points from Jaylen Brown, and 14 both from Kemba Walker and Marcus Smart.

The ordeal of the locals began after a great triple by Facundo Campazzo, his great game, which put the score 79-65 on the scoreboard at 2:17 left in the third quarter. Boston came from living in hardship in the first quarter (16 points scored), from getting up in the second to reach the break losing 51-45, and from losing his footing again in the third, according to Nikola Jokic, he began to display his unbeatable basketball catalog premium. Therefore, you could not expect more than a loss for the Celtics at the hands of the Nuggets who entered the game with 8 consecutive victories (5-0 in April) and 17 wins in their last 20 games. But the game took a Copernican turn from that 79-65. And local control was blown up.

The Celtics tightened on defense, and Denver’s offense began to bog down in an extreme way. Campazzo lost a couple of balls, JaMychal Green committed two offensive fouls in a row against Romeo Langford, Will Barton went off on a tangent for wanting to play his own way, and from those 5 turnovers in the last 2 minutes of the third quarter came the best basketball for the Celtics, who finished the fourth with a 2 + 1 from Kemba Walker to close the third act with a bright 79-74.

Denver did not score a single basket in play in the first 7 minutes of the final quarter (only added one point from the free throw). And between the end of the third quarter and the start of the quarter, the Nuggets conceded a 3-31 run in 10½ minutes of play! Yes, 3-31! Simply mind-blowing.

Tatum led the review from Boston to Denver, scoring 14 points in the final quarter, but we must not forget that much of the comeback was made by the Celtics with Romeo Langford (+18 of his team with him on track) and Grant Williams (+23) ) in action. These two players were part of the defensive gasoline that fed their team, a team that lived in the last quarter from blow to blow: Robert Williams III overturned it with virulence twice, Jayson Tatum, Jaylen Brown hung from the ring with plasticity.

Such was the decomposition that Nikola Jokic, even assisting the reason for some fouls that the referees did not whistle, came to lose face to the game to face the referees and not go down to defend on a couple of occasions, to the point that his trainer, Michael Malone, sat him in the band so that things didn’t get too big.

The Serbian, who only scored 3 points in the first half and completed a great third quarter, added his most bitter triple-double (17 points, 10 rebounds, and 11 assists), while Michael Porter Jr. had 22 points and 11 rebounds after missing 11 of the 12 triples he tried and Facundo Campazzo, who started again due to Murray’s loss, shone with his own light with 14 points, 3 rebounds, 4 assists, 5 of 6 in the field and 3 of 3 in triples in 33 minutes of the game. Very good game from the Cordovan point guard.

Once again, with Fournier out, Boston felt the purest happiness on the court, a perfect symbiosis with the game, because the most festive and effective basketball possible ran through his veins in the final quarter of the game.