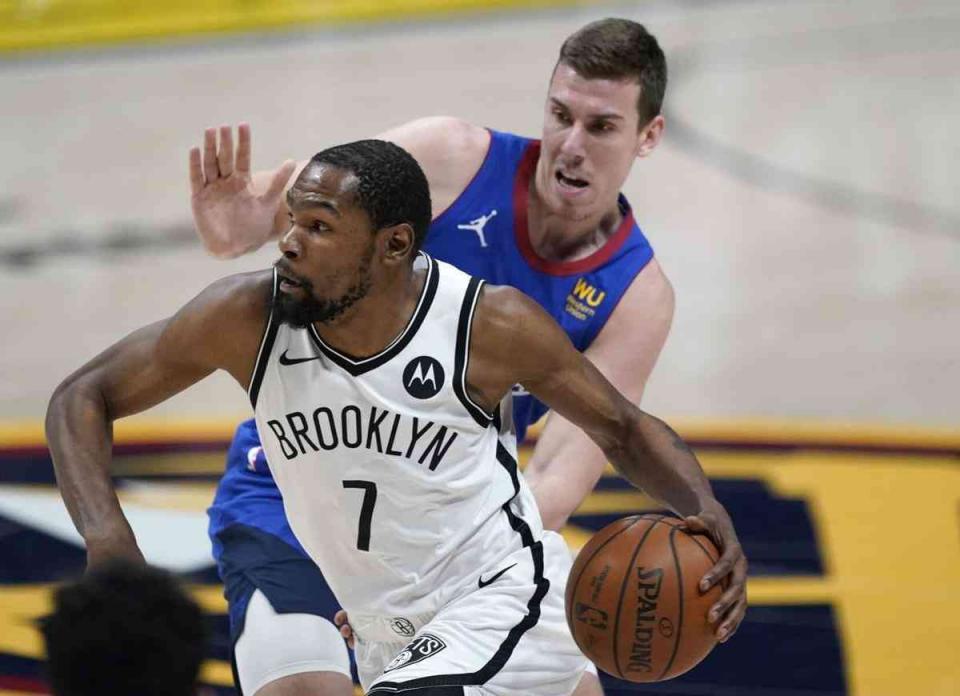 The Brooklyn Nets rallied from a 21-point deficit against the Denver Nuggets to win on the road 119-125 and cut a losing streak of 4 straight games without winning. Tiredness took its toll on the Nuggets’ legs in the second half.

From winning 71-56 in the first half to falling 48-69 in the second. The day and the night. Denver came from playing 24 hours before a difficult game against the Utah Jazz, and Brooklyn had had 48 hours between his game with Dallas and this one with Denver, and that extra day of rest is noticeable, even more so at this point in the season and with the crowd. The home team had to play casualties, which appeared in the game without Jamal Murray, Monte Morris, Will Barton, PJ Dozier, Paul Millsap, and Zeke Nnaji.

These casualties forced Michael Malone to pull unusual players and led him to put a quintet of Harrison, Howard, Cancar, Bol Bol, and McGee on the court at some point. Difficult to sustain the competition like this.

He failed to win the Nuggets in his last regular season game at home, and Facundo Campazzo was unable to celebrate with victory another remarkable personal performance that equaled his best record in the NBA as a scorer with 19 points.

Weighed the quality of Kevin Durant and Kyrie Irving, also that of Blake Griffin, who remembered his best times with a spectacular third quarter. And do not forget that the team is still without James Harden.

Brooklyn, who is now more to think about finishing second beating the Bucks than dreaming of hunting down the Sixers, had Durant with 33 points, 11 rebounds, and 7 assists. Durant was always in his place, worked well defensively in the second half, shot with good hitting percentages, and scored 5 decisive free kicks in the last 21 seconds of the game.

Irving was not behind him: 31 points, with 11 of 17 on the shot and 4 triples scored. He was electric at times, had great plays, got into some sporting struggles with Campazzo, to whom he put a tremendous stopper in the final part of the game, and was loaded with fouls, although he endured without being eliminated.

Griffin, meanwhile, had 16 of his 20 points in the third quarter. A true display of the player in that room, including several triples and a masterful basket to the past basket, reminded us of past times.

Jeff Green was the team’s fourth musketeer with 15 points.

The Nets signed a powerful second half in which they allowed themselves the luxury of scoring 41 points in the third quarter and only conceding 15 in the last, with Denver practically broken and Nikola Jokic desperate with the referees, sometimes rightly and sometimes not.

The team of Steve Nash finished with 62.1% in the field and shot 51.6% from three and forced 33 meters free and 27. Demoledora the Nets offense.

Denver had Nikola Jokic as the leading scorer, author of 29 points, 7 rebounds and 6 assists. The Serbian player melted in the final stretch by distributing his energy between the game and the gaze and the protest to the referees. Michael Porter Jr finished with 28 points, disappearing in the final quarter after starring in a tremendous start to the game – he scored the first 11 points for his team, scored 17 in the first quarter, and left with 21 at halftime.

And then there was Campazzo. His first half was phenomenal (14 points) and, like all his teammates, the second was more gray to finish with 19 points, 5 assists, 3 recoveries, no turnovers and 3 of 6 from the triple in 34 minutes. He went 8 times without failure to the penalty line.

The first half, while Denver’s legs lasted and while Brooklyn was unaware of the defensive work, it was a closed box in which the locals dominated at will: 37-24 in the first quarter, a maximum advantage in the second of 21 points (66-45) and 71-56 at halftime.

Then came the sales. With a 6-18 run, the Nets got into the game in the third quarter with Griffin on, but it wasn’t until the fourth quarter that Nash’s team took the lead (110-111 after a triple by Joe Harris ). From there, the Nets more and the Nuggets less, with the game-deciding in favor of the team that had more legs and more quality.