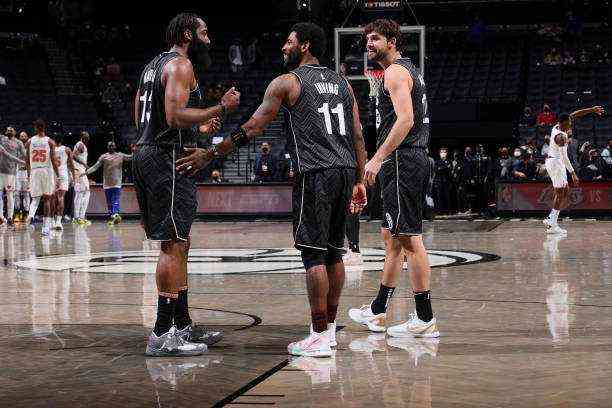 It looked like it was going to be a clear victory for the Nets, but it wasn’t. The New York duel, revalued to the maximum this season, did not disappoint. The Knicks held on to the game, recovered from their bad situation on the scoreboard, and surprised.

With 115-112 and 7.7 seconds left, the referees whistled RJ Barrett for a foul that did not seem like such. In fact, there was a review, and the referees corrected their assessment, leaving everything in a jump between two in the middle of the field. The Knicks were alive, even more so when Tom Thibodeau’s team won the jump to request a time-out: 115-112 with 6 seconds remaining and possession to seek extra time.

It was certainly not the best play in the world to force overtime. At first glance, it seemed like a blunder by Julius Randle, who looked for the triple, seemed to regret it when he was in the air and fell to the ground with the ball in his hand without shooting. 3.2 seconds left. The referees whistled steps, but Randle flew into a rage (even his teammates had to hold him down). The key: did Kyrie Irving touch the ball on the play? The umpires considered that the Knicks no longer missed the game.

Brooklyn suffered, but the truth is that it is a game-winning machine. He has 13 victories in his last 14 games, 12 of those 14 games played, like today, without Kevin Durant. And Blake Griffin is still in the bedroom after his signing, sitting in the band waiting for his debut.

Kyrie Irving and James Harden were essential again. The first made escort numbers, and the second added base figures. The roles are well defined. And the team is doing very well.

Irving, once again spectacular, added 34 points with 13 of 18 from the field and 4 of 6 from the triple; Harden finished with 21 points, 15 rebounds, and 15 assists. It is true that Harden did not shoot well and lost 7 balls, but he once again offered a real display of team management. It is his 10th triple-double with the Nets, and he becomes the first player in the franchise to make a triple-double with at least 15 points, 15 rebounds, and 15 assists. And in this franchise a certain Jason Kidd played.

The Nets’ third player was Jeff Green, who finished with 20 points after scoring 14 in a beautiful first quarter. He’s bringing Green to these Nets.

Meanwhile, the star of the Knicks was Julius Randle again. His season has earned him being an All-Star and a great game against the New York rival. Randle had 33 points, 12 rebounds, and 6 assists. It was he who made it possible for his team to reach the final seconds alive and in himself ended the frustrating possibility of victory with that triple that never got out of his hands to seek the tie.

In addition, 23 points from Barrett (with 10 free without failure) and 21 from rookie Immanuel Quickley, who had plenty of shots and some incorrect decisions in the final stretch of the game. Things of the age. He is young and talented. Another player who is performing at a high level.

We must not forget, far from it, the 19 with 5 triples for Reggie Bullock , who made a tremendous first half and did a great job in defense throughout the game.

The game left us with a spectacular start from Bullock from the triple, a great block from Nerlens Noel to Jeff Green in the first quarter (the only missed shot by Green in the first half), a wonderful alley-oop between Harden and Nic Claxton already in the second act, a brutal individual play by Kyrie Irving with ball handling, reverse and final touch to score, also occurred in the second quarter.

These Knicks have become a competitive team with Thibodeau. Without Elfrid Payton, Derrick Rose, Mitchell Robinson, and the ousted Austin Rivers, the Knicks were in the mix until the end.

The competitiveness of Steve Nash’s Nets goes without saying. Without Durant, they go like a rocket … it is to start to tremble.