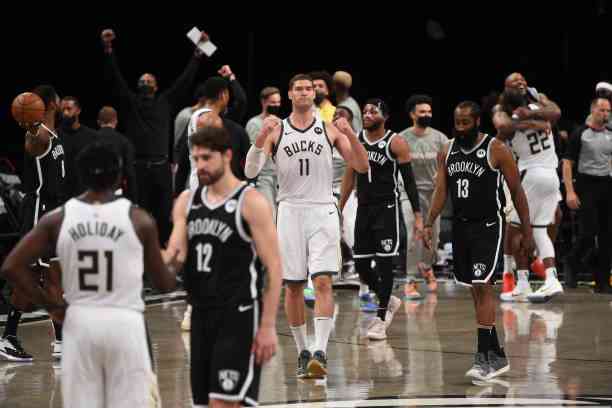 111-115 win to reach the Eastern Finals despite Durant’s 48 points. The Bucks to the Eastern Finals after beating the Nets at Barclays Center in overtime of Game 7. There was no overtime in a seventh playoff game in 15 years. Milwaukee leaves behind some burdens of the more recent past led by a great Giannis Antetokounmpo.

Victory 111-115 with 40 points from the Greek player and 48 from Kevin Durant in the Nets, in what is the highest score by a player in a seventh playoff game in NBA history. It is the third time in history that two players have scored 40 or more points in a seventh postseason game. The exhibition of both has been spectacular.

A series and a match that has culminated with maximum emotion, although with the fact that over time has been a small disaster (2-6 in 5 minutes) due to the ultra-short rotation, extreme until the last consequences, which have developed so much Steve Nash as Mike Budenholzer, squeezing his stars out of the chassis, resulting in more survival time than anything else.

The one, Nash, perhaps impelled by his condition as a rookie who wants to tie up, and the other, Budenholzer, forced by his reality as a coach with the sword of Damocles over his head, have over-braked in their time management and their resources, but it must be recognized that the thing was not to walk on the wire without at least a minimum protective net.

The truth is that it was a very balanced game that Milwaukee would have won in regulation time if it had not been for the manufacture of a new miracle by Durant, who a second after finishing the last quarter has launched an impossible shot, without a well-defined position, with the defender on top, to score the 109-109 that has led to extra time. He has done it by narrowly stepping on the line of 3. That is, the miracle could have been definitive.

Already in extra time, a Bruce Brown basket, Bucks problem to close the rebound – one of his strengths throughout the game – and mistakes and more mistakes until Antetokounmpo had made it 101-101 and Khris Middleton scored the crucial shot with 40 seconds to play (101-103). Important stopper to Durant by Brook Lopez, who thus made up for his unfortunate offensive action in the last seconds of the fourth quarter, and last play of overtime in which Durant sought the second miracle of the night, but the good defense of Jrue Holiday, Durant’s brutal fatigue and time pressure made the ball stay very far from the rim.

Victory for the Bucks to prevail 3-4 after losing 3-2. The loss of Kyrie Irving and the decimated physique of James Harden were decisive. It seems like these healthy Nets can be unstoppable, but his physical condition forced Durant to live in a permanent hero ball that was effective until his almost limitless body said enough.

Antetokounmpo was the engine of a team that survived during the game to the horrible night in the shooting of Khris Middleton and Jrue Holiday (6 of 32 in the field and 1 of 10 in triples between them in the first three quarters), two players who, yes, in the decisive moments of the game they stepped forward and were important.

The Greek added 40 points, 13 rebounds, and 5 assists with 15 of 24 in the field goal, he made 2 triples (one with a lot of fortune), he only lost 3 balls, and he showed himself well from free (8 of 14) despite doing two horrible airballs, he even had a 6 of 7 streaks in the game. Beyond that, he was mature, never slowed down, and scored a very important basket in extra time when his team was blinded in the attack. He has the two-time MVP 5 straight playoff games with at least 30 points and 10 rebounds, tying a franchise record held by Kareem Abdul-Jabbar since 1974.

The other two important men were Khris Middleton and Brook Lopez. Middleton improved when it was necessary to improve to finish with 23 points, 10 rebounds, 6 assists, and 5 steals. Of course, 9 of 26 in the shot. And Lopez added 19 points, 8 rebounds, and 4 blocks, his only mole being the crucial play at the end of the fourth quarter in which he inexplicably failed to shoot when possession time ran out. It is difficult to know what the experienced player was thinking.

Jrue Holiday finished with 13 points, 7 rebounds, 8 assists, and 5 of 23 on shooting. The best of the point guard was his resurrection in the final stretch of the fourth period, when he starred in a beautiful tug-of-war scorer with Durant. He struggled so much on defense, many times defending Durant in the post, that it is understandable that he did not have much precision in the attack.

And then there was PJ Tucker, of course, who gave up against Durant and still had the strength to score 11 points and slap down a crucial offensive rebound in the closing seconds of the fourth quarter.

In the Nets, Durant again went wild: 48 points, 9 rebounds, 6 assists, 36 attempted field shots, and 53 minutes without resting, like Harden. A strenuous work that ended in physical death: 0 points in extra time with 0 and 6 in the shot. Give a ten to his surgeon, his rehabilitation program, his tenacity, and his privileged physique.

Harden added 22 points bordering on the triple-double, but he shot badly to the basket, he actually did what he could, because he was not even able to make a good run. Blake Griffin exhibited great physical waste defending Anteto and scoring 17 points and 11 rebounds (both he and Tucker fouled out). Important is the good image developed by Griffin in these playoffs. Also, 14 points from Bruce Brown, which went from high to low.

The Nets starters had 111 points and their backups 0. In reality, there were almost no backups, as happened in the Bucks, whose only weighty backup was Pat Connaughton.

In the end, a few centimeters and a hundredths, like the one he says, separated success from failure, the fight for the title from possible dismissal, the claim as a superstar of a new fall from grace, the status of indisputable hero from that of hero.