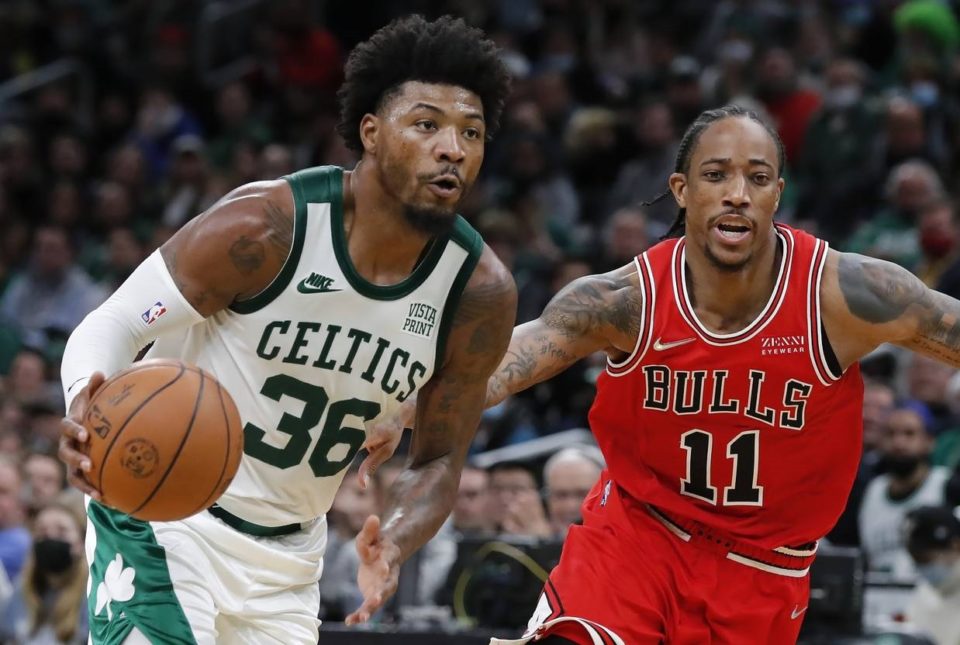 Chicago wins the final quarter 11-39 to get the best record in the league (6-1). Great game for Al Horford in a Celtics who do not know what it is to win at the Garden.

Chicago Bulls leaves the day with the best record in the entire league, a spectacular 6-1. He does so after causing a short circuit of considerable dimensions to the Celtics in the fourth quarter that ended 11-39.

Brutal raptor in the final quarter to win 114-128 with 37 points from DeMar DeRozan, a player reviled by more than one who is showing his enormous quality at this start to the season with his brand new team.

It was the Celtics-Bulls, a game of streaks from start to finish.

The night started with the Bulls hitting 5 triples without failure in the first 4 minutes of the game and with the Celtics coming back from 11-20 to 29-26 to go at the end of the first quarter, winning 35-34 after not losing a single ball and holding on the scoreboard despite the excellent percentages of the rival team.

And streaky was the second quarter as well. He started with a 0-12 for the Bulls and continued with a forceful response from the Celtics encrypted in a 10-0 that was extended to a 27-8 with a basket from Al Horford, his huge game, to put an 8 advantage to Boston (62-54). At the break: 67-59. With the Celtics at 9 of 16 from the triple and a ratio of 8 steals and only 1 loss to no Chicago recovery and 9 misses. Everything seemed to be on the right track for the locals.

The third quarter brought us another streak, this one in favor of some Celtics who left on the scoreboard and seemed to decide the game when they took a 19 advantage (94-75) 3 minutes before the end of the third quarter, which ended 103- 89. The second and third quarters were the best moments for the Celtics and Jaylen Brown’s field, who scored 26 points in that phase of the game.

But then, in the last 12 minutes, the final streak arrived, the wild partial with which Chicago crucified Boston, that unreal, hallucinatory, stratospheric 11-39 with which the Bulls claim to be a top-level team in this competitive start and with which Celtics once again show their lack of defensive commitment, beyond the fact that their attack in the final part suffered an unbearable drought.

The numbers in the last quarter say it all. Boston made 21.7% of its field goals, with 0 of 8 from the triple; Chicago made 81.3% of its shots in play, with 3 of 6 from the triple and 10 of 11 from free. The rebound in the last 12 minutes: 3-16 for the visitors. Zach Lavine got more points in the fourth quarter (13) around Boston Celtics (11)! It was a real bath. A true reality bath for disintegrated Celtics.

Chicago finished the game with a 57% accuracy in the shot and enjoyed an excellent second unit, with good performances from Derrick Jones Jr., Alex Caruso and, above all, the young Ayo Dosunmu, author of 14 points in 22 minutes without missing a single shot. A real draft steals this player.

DeRozan was the king of the night with 37 points (10 in the final quarter), 7 rebounds, and 15 of 20 in the field goal, which included a 3 of 4 from the triple. Zach LaVine, 13 points in the final quarter, finished with 26 points and 7 assists despite not being accurate from the triple, Lonzo Ball made 4 triples, and Nikola Vucevic contributed 11 points, 10 rebounds, and 9 assists, exerting mortar in the solid away game.

In Boston, 28 points by Jaylen Brown, who did not score in the final quarter, 20 by Jayson Tatum with 8 of 22 in the shot, and a great performance by Al Horford, one of the most salvageable of the local team. The one from Puerto Plata signed 20 points, 10 rebounds, and 3 blocks, with good shooting percentages, after playing 33 minutes. He seems rejuvenated. Marcus Smart improved previous performances to add 16 points and 4 steals, and Dennis Schröder had 13 from the substitution.