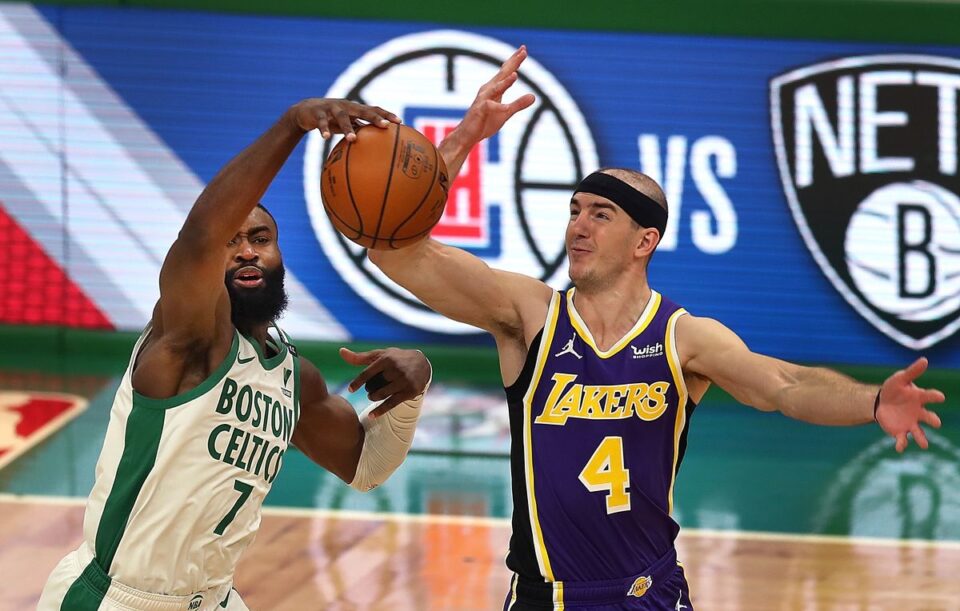 Boston nearly lost a 27-point lead in the last 7 minutes of the game.

Again the Celtics are swinging between display and bewilderment. It happened in the last quarter. Boston was devastating its eternal rival, the Lakers, mercilessly when the power suddenly went out, and it was about to lose a game it had won.

The Celtics led by 27 points with 7 minutes remaining, but a 24-2 run left them on the brink of distress, bringing the score to a tight 110-115 with 1:18 to play. Shortly before, at 1:50 left, Brad Stevens was forced to return Jaylen Brown, the match Jayson Tatum, and Marcus Smart to the court, a very bad sign in a game that minutes before had been practically given by finished.

With that 110-115, it had to be Brown who rescued his team from a pit that seemed to have no end. Jaylen Brown thus completed an excellent game, a dazzling performance that resulted in 40 points, 9 rebounds, and an impressive 17 of 20 from the field goal. Imperial Brown, essential and wonderful.

The game had started without Robert Williams III on the home side and without Andre Drummond on the visitor, which left veterans Tristan Thompson and Marc Gasol as starters. The Spaniard started hesitantly at an equally hesitant start for his team, but progressed to become one of the Lakers’ most outstanding players.

Gasol finished with his best scoring mark since he was in the Lakers. He added 18 points, 4 rebounds, and 3 assists in 21 minutes, with 7 of 10 from the field goal and 3 of 4 from the triple. His best moment came in a fantastic third quarter in which he scored 11 points.

Beyond that Celtics final bum that almost cost him a displeasure, the visiting team was the clear dominator of the game, a dominance that extended from the initial jump to the final honk, and that was not fully reflected in the final score, which left us a very misleading 113-121. This time, the Lakers defense was conspicuous by its absence and the Celtics attacked like a Swiss precision clock: 31, 30, 30, and 30 points per quarter.

The Celtics, who lost no less than 21 balls!, Finished the game with very good shooting percentages, including 56.5% on the field goal.

They had the Bostonians and Brown with 40 points, Marcus Smart and Payton Pritchard with 15 each, the kid very well, and Tatum and Thompson with 14.

In addition to a notable Gasol, Lakers had Talen Horton-Tucker as the leading scorer, finishing with 19 points, 7 rebounds, 7 assists, and 3 steals. He took a step forward in the absence of LeBron James, Anthony Davis, Andre Drummond and Markieff Morris.

Ben McLemore, with 17, was the great architect of the Lakers comeback in the final quarter, a quarter in which he scored 15 points. Kyle Kuzma, his best moment was the third quarter after a horrible first half, added 13 points with gray percentages, and Montrezl Harrell finished with 12 points and 8 rebounds. The Lakers substitutes scored 69 points. Very bad games for Dennis Schröder , who seems to have played with an infection in his foot, and Kentavious Caldwell-Pope, who after 90 seconds of play already had 2 fouls.

The party marked its tendency towards the Celtic from the initial jump. Boston went 7-21 at the start, prompting a Vogel timeout. From there, with greater or lesser slack, away dominance: 23-31 in the first quarter, 48-61 at halftime, 79-91 at the end of the third period …

And the final takeoff of the Celtics came at the start of the final quarter. Partial 2-15 in just 3 minutes to put the 81-106 on the scoreboard with Jaylen Brown driving his team. There the game was definitely broken, although then Boston was about to screw it up in a bad way with the Lakers substitutes caressing the feat.