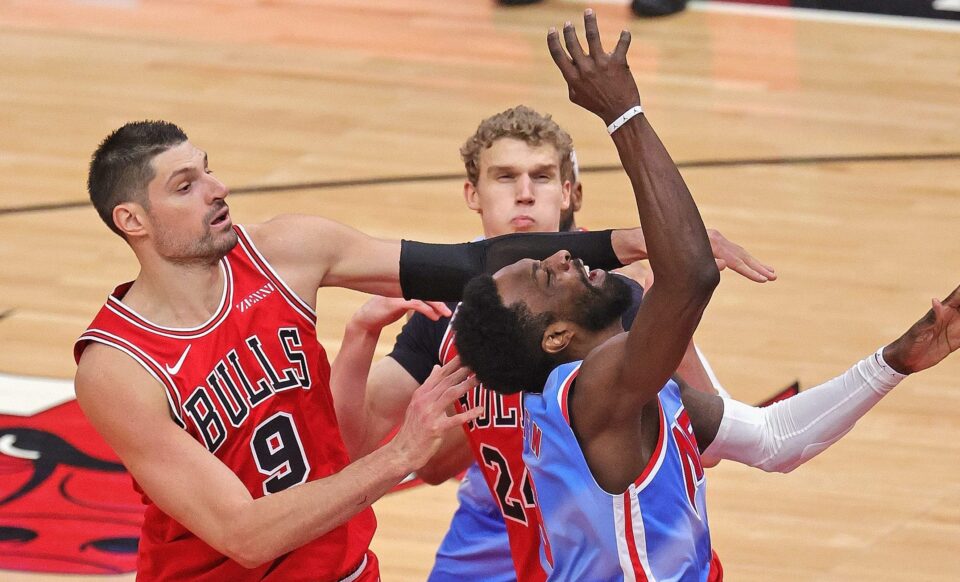 Vucevic makes his Bulls debut at the United Center, forming a winning trio with LaVine and Satoransky.

Brooklyn loses starting with Irving, Aldridge, and Griffin in their first start.

Brooklyn Nets bit the dust in Chicago. The Bulls deservedly prevailed in what marks Nikola Vucevic’s first victory with his new team’s elasticity. They came those of Billy Donovan lost their last 6 games.

Full for Vucevic because this was his first home game with the Bulls at the United Center. So far, he had played 4 games, all on the road and all lost in an unproductive tour of the West that led the team to lose to Spurs, Warriors, Suns, and Jazz.

This game did not seem the most suitable for Vucevic to release his record of victories, but appearances are deceptive. The Bulls prevailed comfortably from the great work developed by Zach LaVine (25 points and 5 assists), Nikola Vucevic (22 points and 13 rebounds), and an outstanding Tomas Satoransky (19 points and 11 assists with 8 of 10 in the shot field).

Chicago finished with 55% on the field goal, had 23 more free throws than its rival, and had 6 players on 10 or more points, completing the list of outstanding scorers Thaddeus Young, the player with the gift of ubiquity, rookie Patrick Williams and former Celtic Daniel Theis, who is already starting to perform for his new team.

Coby White’s discharge did not disrupt Donovan’s team, and Lauri Markkanen has been permanently stranded in a secondary role.

Nothing foreshadowed an undeniable triumph for the home team when in the first quarter, the Brooklyn Nets already took a 9-lead. The disadvantage did not go beyond there, Chicago regained its place, went at the end of the first quarter losing by 3, and offered a great second quarter in the defensive section until leaving its rival at 18 points and going to rest winning 57-46 after a great final stretch of fourth with Satoransky as the protagonist.

The resumption reaffirmed the dominance of the Bulls, who managed to accumulate 18 points of advantage in the third quarter to not give their rival options from there until the end of the game.

Brooklyn tried in the fourth quarter, but his reaction was late and insufficient.

The Nets played without Harden and Durant, and featured Blake Griffin in their starting five for the first time, who formed a truly striking shortlist with Kyrie Irving and LaMarcus Aldridge.

The team of Steve Nash missed due to injury in the fourth quarter to Tyler Johnson, an injury that looks bad, and gave the East provisional leadership pending what to do today Sixers Grizzlies.

On Sunday, the best of Brooklyn is his 5 turnovers, being an example of the good treatment of the ball Kyrie Irving, who gave 15 assists and only lost one ball!

Irving led his team with 24 points and 15 assists. He did not score a single triple, and it is striking that he threw 27 field goals and did not go even once to the penalty line.

Jeff Green contributed 21 points from the substitution, while from the start, the newly acquired LaMarcus Aldridge and Blake Griffin finished with 11 points and 3 blocks and 10 points and 8 rebounds, respectively, after playing 26 and 22 minutes.