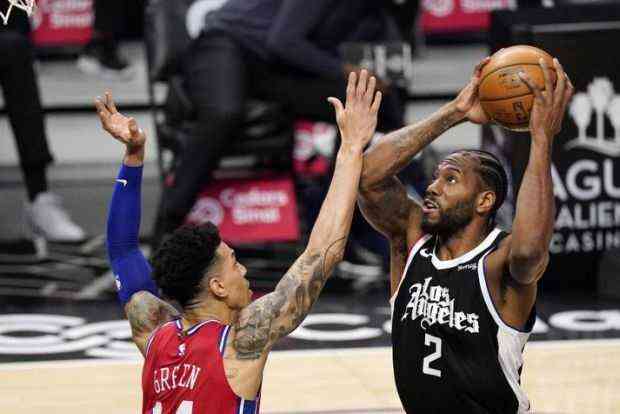 A warm welcome to Doc Rivers at Staples Center from the team he coached for 7 years. A cozy reception that did not move to the court in the mere sports field, because there the Clippers were in charge of defeating their former coach without any type of nostalgia flowing through them.

Local victory against a Sixers who still do not have Joel Embiid, despite which they entered the game with a 7-1 record playing without the Cameroonian. Clippers triumph by 122-112 without turning away much of the old recipes that Rivers applied during his long stay on the Los Angeles bench.

Clippers took advantage of the third quarter opening to open a small gap on the scoreboard, enough cushion not to lose control on the court until the end of the game.

The third quarter ended with a 13-point lead for the Californians, who extended their distance in the light to a maximum of 19 points in the final period. There was no real room for excitement in the final minutes of the match.

The local squad attacked the paint well and moved the ball very well throughout the game in search of a good shot selection. Good shooting percentages made the difference in a game in which the fight on the boards for rebounds was tremendously balanced.

The local stars did not fail, and that is news in the case of Paul George, who lately has been showing very irregular with his shot.

The duo formed by Kawhi Leonard (28 points and 3 recoveries) and Paul George (24 points, 9 rebounds, 9 assists, and 3 steals) was joined by the young Terance Mann, a player who is having a great season. Mann finished with 23 points and a great 10 of 12 on the field goal, to which he added his usual work in the rear.

The Sixers received 4 techniques throughout the game. A couple of them went to Dwight Howard, who was sent off for the second straight game. The visiting pivot fell at 10:35 from the end of the game with a score of 99-87.

Howard was once again intense in the game, like the whole season, with 9 points and 11 rebounds in 19 minutes. He was, along with Shake Milton, the soul of the Sixers’ second unit.

In the first, a man above all: Tobias Harris. Harris added 29 points, 7 rebounds, and 6 assists, finishing with a fantastic 13-of-19 shooting series.

In addition, 17 points with 5 triples by Danny Green, again accurate from long distance, and an irregular game by Ben Simmons, always great in defense this season, but lacking this time in some points of his game where he is usually strong. He added 15 points and 7 rebounds, but lost triple the balls (6) of those he assisted (only 2). He was eliminated by committing 6 fouls. His foul problems made him stay only 26 minutes on the track.

The game had a very special spectator in the band, Rajon Rondo, recently traded to the Clippers. Currently, the Clippers are practically orphaned on bases. Patrick Beverley is out of the game, point guard Lou Williams sent to the Atlanta Hawks, and Rajon Rondo is still unable to debut with his new team.

Adebayo Resolves The Heat-Nets Over The Horn