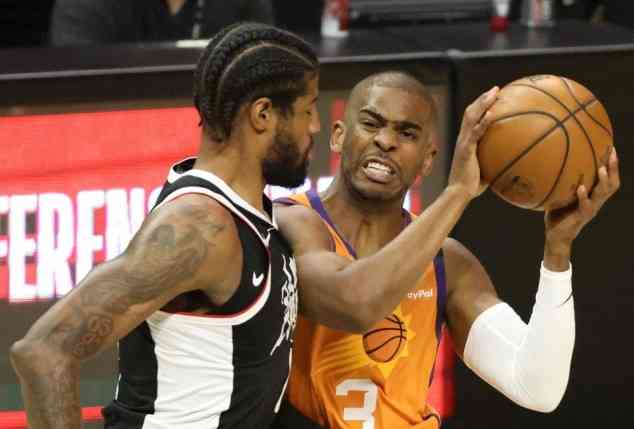 Paul George leads the local triumph with Reggie Jackson and Ivica Zubac as squires. Clippers dominate in the third quarter and prevail in the match from the defense.

Everything was looking good for Phoenix. They dominated the Clippers 2-0. And he recovered Chris Paul (Covid-19) while the Clippers were still without Kawhi Leonard (knee). But that initial positive impression was broken in the second part.

The Angelenos won 106-92. With a partial score of 60-44 after the break. Playing again with a classical quintet. With Ivica Zubac as a reference in the painting. With Paul George adding 27 points, 15 rebounds, and 8 assists. It is true that he did not have good shooting percentages. It is true that he lost 6 balls. But it was the undisputed leader. He was on track for 43 minutes. He led the show.

Again at his side Reggie Jackson, the reborn. Convincing new match from Clippers sensation. Today, 23 points.

Also important are Ivica Zubac, Terance Mann, and Patrick Beverley. The first had 15 points and 16 rebounds. He fought well with Deandre Ayton. With Zubac on the court … +28 for the Clippers! Mann had 12 points. It was vital in the very important third quarter. It was another after the break. He went out to eat the world. More aggressive in attack. Tremendous the plug that put Devin Booker in the final quarter. And Beverley was Beverley. Intense to dementia. His defense was excellent. And he also finished off the rival with 5 points in the final stretch of the game.

Clippers turned the game around in the third quarter. He did it from the defense. With a much more aggressive Terance Mann in the attack. With a Paul George taking command. With a 34-21 run in the fourth. After coming from only scoring 17 points in the second set.

That third quarter closed with an impressive triple from Paul George. From the middle of the court, against the board, and on the horn. For the 80-69. Triple important. The locals had reached 15 up in the third act (71-56). With a basket of the ubiquitous Mann. After 25-8 partial in the fourth. It was these revealing 12 minutes. The trend of the game had changed. The Clippers were on the right track.

That good line was confirmed at the beginning of the last quarter. A 3 + 1 from Luke Kennard. A triple from the Marcus Morris headdress. A couple of free Paul George. And +18 on the scoreboard (89-71). The maximum advantage of the Clippers.

Then came a little roller coaster. The Suns reacted 0-12 for 89-83. He had left. But it was either a delusion or an ultrashort hope. Because immediately the local reply arrived. Jae Crowder got his sixth foul with 4:51 left. He got like a basilisk. And everything definitely went wrong for Phoenix. Chris Paul was coming back from a positive for Covid-19 and was not full. Devin Booker had to play with a mask after breaking his nose. And he was very unsuccessful in shooting. Cameron payne he had injured an ankle in the first half. And he could only play 4 minutes. A cluster of circumstances that Clippers took full advantage of. With great defensive work and with a lot of offensive aggressiveness. A triple by Pat Beverley definitely killed the Suns. It was 104-88. 2:20 left. Everything was decided.

Suns were not in attack. He fell below 40% shooting effectiveness. No player on the team reached 20 points. Especially poor shooting accuracy by Chris Paul and Devin Booker. The point guard added 15 points and 12 assists, but with 5 of 19 at the pitch. The guard scored another 15 points, but with 5 of 21. He was never comfortable either with the mask or with his defenders. Especially when Beverley was with him. Between Paul and Booker … 10 of 40 on the field and 3 of 14 on triples! And Booker charged himself with fouls. He made 3 in a row in the third quarter to add 4. Monty Williams saw it so badly that he returned to the game in the same third quarter. Already in the last period, he committed his fifth. It wasn’t a good night for him.

Ayton worked well again: 18 points and 9 rebounds. But Zubac got on his beard. Nice game from Cam Johnson. And it is over. Payne’s injury was the final straw for a Suns who lost steam as the Clippers stepped up their defense.

Now the series is 2-1 for Phoenix. Clippers don’t lose faith. After all, he is living off his comebacks. And unfortunately, he’s getting used to playing without Kawhi. Seen what is seen, nothing is impossible.

Towns And Hernangomez Shine In The Pelicans-Timberwolves