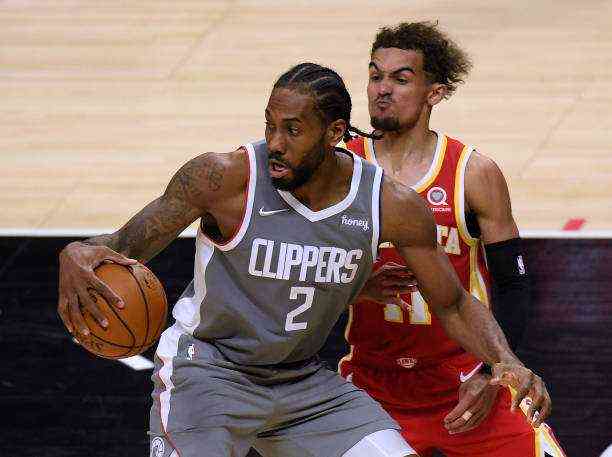 Kawhi decides in the final stretch after the great games of substitutes Mann and Kennard. The Atlanta Hawks lost their first game under coach Nate McMillan.

He broke the perfection imposed by Nate McMillan since his arrival at the top of the Hawks bench. Until today, Atlanta had a perfect 8-0 with him, an 8-0 that could have become 9-0 had it not been for a spectacular comeback by the Clippers and a huge collapse of the Hawks in the game’s final stretch.

The Clippers trailed 66-88 playing the third quarter. No less than 22 points behind in a game that the Hawks were dominating. But from there, everything fell apart for Atlanta, who conceded a tremendous 53-22 to lose 119-110. The last quarter finished 37-20.

Kennard finally justified the contract signed by the Clippers. He had 20 points (all in the second half), 7 rebounds, and 4 assists playing just 18 minutes after making all his field shots (8 of 8), including 4 triples.

Mann went beyond his defensive work to finish with 21 points (11 in the final quarter) and 10 rebounds. Spectacular their work.

Although, yes, the one who decided the game in the final stretch was Kawhi Leonard with a block and a pair of triples.

The Clippers comeback reached its climax with two baskets from Mann. The first put 103-103 at 4:33 from the end. The Angelenos had caught up with their rival. The second placed the 110-108 at 2:42 from the conclusion to overtake the locals.

From there, triple by Marcus Morris (19 points and 5 triples to his credit) for 113-108, Kawhi’s block to John Collins immediately after, and triple by Kawhi himself without giving time to breathe for 116-108 with 1: 23 for playing. Clippers were released, and Hawks had shrunk to the point of disappearing from the track. And when he wanted to appear with 116-110, Kawhi again put the final 119-110 with another triple! Leonard is in a killer state.

Kawhi Leonard finished with 25 points, 7 rebounds, and 5 assists to lead his team, who survived the poor game of Paul George (8 points with 3 of 12 on the shot) and the irrelevance of Lou Williams (9 minutes on the court). Good first part by Ivica Zubac, although the first half of Tyronn Lue’s team was quite deficient, reaching the intermission with a 48-63 result in favor of Hawks.

Atlanta was outmatched in the second half when it believed it had control of the game. Trae Young only had 8 points after the break after having shone in the first half. He finished with 28 points and 8 assists. John Collins added 23 points on 10-of-14 shooting, and Clint Capela had 12 points and 14 rebounds.

The Hawks closed the game in the worst possible way, conceding a 14-2 run in the final 3 minutes. The final straw was the final pull that gave the Clippers the victory and left Atlanta completely KO.

The Best AD Of The Year! You Have To See The Video Of The 75th Anniversary Of The NBA With Michael B. Jordan.