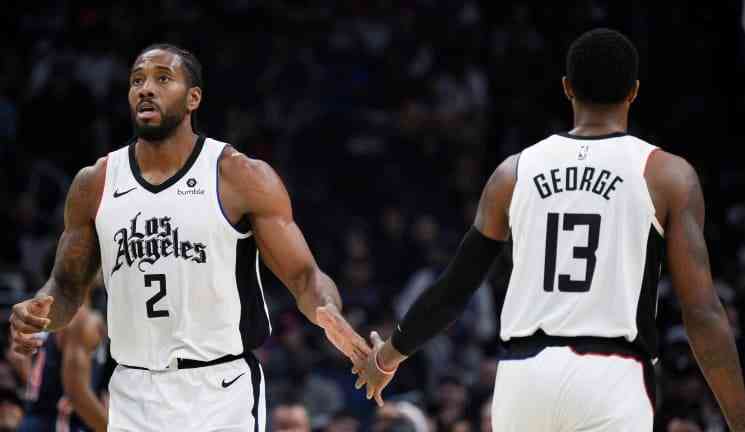 Batum raises his offensive contribution, and the Angelenos prevail by a resounding 132-106. Utah Jazz plays again without Mike Conley, and Donovan Mitchel has an ankle sore again.

Vigorous reaction from the Los Angeles Clippers after losing the first two games in Salt Lake City. The series moved to the Staples Center, and everything changed. Clippers defended much better and, above all, their offense was a weapon of mass destruction.

The team Tyronn Lue had the best versions of Kawhi Leonard, who in this series was not playing his usual height, and Paul George, criticized especially following the first game. The two of them responded outstandingly.

Kawhi finished with 34 points, 12 rebounds, 5 assists and 14 of 24 in the field goal and George added 31 points, 5 assists, 6 triples and 50% in the shot in play. Spectacular Kawhi when he got over Donovan Mitchell’s mark in the first quarter (0 points from Jazz player). With their two stars at this level, the Clippers’ shares skyrocket in the tie.

To these must be added the enormous step forward taken in the attack by Nicolas Batum (17 points, 7 rebounds, 4 triples, and +24 for Clippers with him on the court) and the continuity in his good game by Reggie Jackson (another 17 points and 5 of 6 from triple).

Lue raised Terance Mann’s minutes on the track (22), continued to rely on Patrick Beverley, and permanently removed the experienced Rajon Rondo and DeMarcus Cousins from the rotation.

Clippers made 56% of their field goals and only lost 9 balls in a game in which the two teams threw profusely and hit 3 (both teams made 19 triples).

After conceding a 0-8 start in 74 seconds, local dominance was constant throughout the game that forced Lue to call a timeout. From there, Snyder’s were always in tow. The Californians came back, they went at the end of the first quarter, winning 27-23 and at halftime winning 64-49.

Maximum versatility, with Clippers conceding just 23 points in the first 12 minutes and scoring 37 in the next 12. Paul George and Reggie Jackson were the ones who opened the gap in the light with 4 triples and great offensive success, Jackson closing the first half with a basket in the last second.

Utah cut to 8 behind (84-76) playing the third act, but could never go from there, finishing the fourth 94-83 after having a maximum advantage of 17 points for the locals.

And the last quarter was the final blow for the Jazz. The local advantage was growing and growing, and Utah, who returned to play without Mike Conley , saw how Donovan Mitchell (30 points today) went to the locker room after hurting himself in an inning to basket – he had already touched the previous game. The good thing for his team is that he returned to the band and did so with the intention of re-entering the court, something that was not necessary because his team definitely sank without him on the court, which made it useless for Snyder to take risks with his presence in the game.

Clippers had a maximum advantage of 28 points in an already inconsequential quarter as the minutes were consumed to win 132-106 after a 38-23 quarter with 13 of 19 on the field and 5 of 7 on triples. This time the Angelenos’ ability to define was impeccable.

Great home victory with a much better defensive load from their players, a victory that was imperative if the Clippers wanted to stay alive in this conference semifinal.

Utah had, in addition to 30 points from Mitchell, 19 points and 5 triples from Joe Ingles, who made a great first half, 14 from Jordan Clarkson in a gray performance, and a double-double from Rudy Gobert, which this time did not make a difference. in the paint. Bad game by Bojan Bogdanovic, unlucky in the attack.

After the loss, Snyder’s men now have the double duty of taking care of the injured Conley and the injured Mitchell, because without them, there is no series against the Clippers.

Kevin Garnett Blows Up With NBA Stars Of The 90s: ‘They Couldn’t Play These Days’