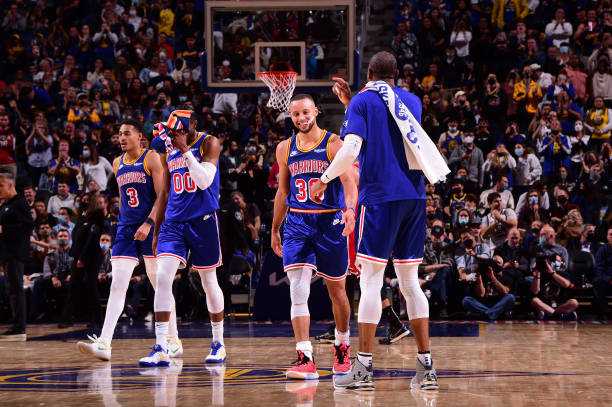 Warriors win 89-104 with 8-36 in the fourth quarter, with Curry scoring 20 points. Cleveland sinks down the stretch due to backlog and casualties.

At the most opportune moment, the magic of Stephen Curry appeared to park the dream of the Cavs and crush their little great revolution, because nothing else was to finish the third quarter winning by 13 points with half an injured team, including crucial players.

The Cavaliers had their legs and Curry’s wrist killed. His legs ran out of energy in the last quarter, because we must not forget that Cleveland accumulated 3 games in 4 days against the Celtics, Nets, and Warriors, the last two in 24 hours, showing competitive against all his rivals despite the fact that his infirmary can not cope. Today, the casualties of Collin Sexton, Evan Mobley, Jarrett Allen, Lauri Markkanen, and Lamar Stevens were joined by Cedi Osman, who was playing very well. The definitive auction.

On the other side of the court, a team that does not forgive, a team that annihilated the Nets exhibiting a spectacular game and that today had to pull its best tricks at the last minute to make up for what was until the beginning of the last quarter a bad Steve Kerr Hosts Party.

Mind you, what a way to make up for those disappointing first three quarters! The third quarter had finished 81-68. Warriors were on the ropes. But the beginning of the last episode was a massacre perpetrated by all the Warriors, but especially by a Curry with a sharp fang.

The Golden State defense bit, in the best sense of the word, in the final quarter, with Draymond Green as high priest, a Draymond Green who, it must be said, in addition to defending cinema and spreading passion, had some approval arbitration at the time of distributing tow.

The Warrior’s fourth quarter was perfect. Its physical background wiped out what little the locals had left in the warehouse.

In the last 12 minutes, the visitors signed 36 points, with 15 of 25 in the field goal, they made 6 triples (4 of Curry), they only lost one ball and they assisted 14 of their 15 baskets! When Kerr’s team moves the ball almost this season, it is an absolute delight to watch him play.

On the other side, the interstellar void. In the last 12 minutes, the locals offered a 2 of 14 in the field goal (with 0 of 7 from the triple) and lost 6 balls. Cleveland wasted his first 12 possessions of the quarter! And in those 12 possessions, those of San Francisco blasted the game.

Curry finished the night with MVP numbers: 40 points, 6 assists, 15 of 27 on the field, and 9 triples scored. He made 40 points shooting just one free throw.

At his side, a Draymond Green capital in defense and in the circulation of the ball, or how to be important without looking at the basket (he only shot 3 times). The power forward gave 14 assists.

Serbian Bjelica made a great first half and finished the game with 14 points and 3 steals, and Mexican Juan Toscano-Anderson added 7 points, 5 rebounds, and 3 assists in 16 minutes in which his team shot on the scoreboard.

Because the participation of the Mexican and other substitutes such as the aforementioned Bjelica, Otto Porter Jr., or Damion Lee were essential. With them, the bus flew.

On the negative side, the gray games of Andrew Wiggins and Jordan Poole, the non-existent contribution of Kevon Looney, and the disastrous work of the Californian team, which was missing this time Iguodala, on the rebound.

The best record in the league, Warriors is already 13-2 and leaves the Cavaliers at 9-8.

In the Cavs, 25 points from Darius Garland, who lost 7 balls, and great games from an amazing Dean Wade (17 points, 9 rebounds, and 5 assists) and a reborn Kevin Love (17 points and 7 rebounds in 22 minutes). Ed Davis, again a starter due to the circumstances, grabbed 14 rebounds (13 in the first half!) And Ricky Rubio faltered this time. He had 10 points and 5 assists with 4 of 15 shooting and 5 losses. He spent 38 minutes on the court, and he looked very tired in the final part. Also, nice work from Isaac Okoro.

Golden State leaves Cleveland strengthened and with morale through the roof due to its tremendous end, and the Cavaliers end up downcast, but they will finally have a rest, 3 days without playing that will come in handy.