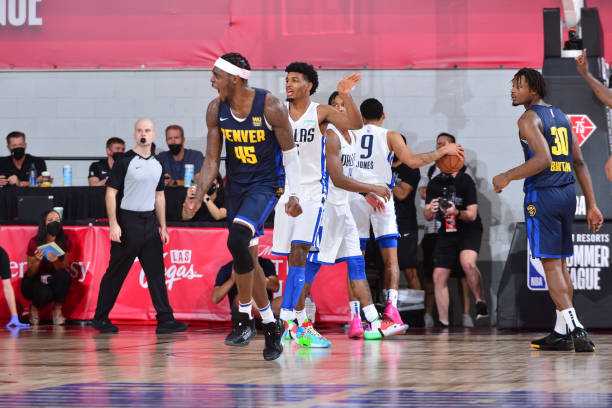 Nuggets can’t beat despite Nikola Jokic’s display of play. In the long-awaited duel between Luka Doncic and Nikola Jokic (the Serbian thing is from another world), a duel that did not disappoint, Kristaps Porzingis got in the middle in the first three quarters and Tim Hardaway Jr. in the last. Porzingis and Hardaway Jr. were the differential points that tipped the balance in favor of Dallas.

Dallas Mavericks is still in a sweet moment. Victory against Nuggets by 111-101 to pass the Denver team in the standings: 9-4 Dallas (6-1 at home) and now 9-5 Denver. But not all that glittered was gold because the Texans took a sour blow 44 seconds from the end when Luka Doncic was injured, who went straight to the locker room, thankfully on his own foot.

Even so, Doncic’s injury does not look good, although it may come to nothing later, because Austin Rivers fell on his foot and the Slovenian’s ankle bent completely, in an action that was quite reminiscent of the injury he suffered last year, LeBron James.

Beyond waiting for the results of the medical tests, Dallas, as long as Doncic’s is not serious, is in good health this start of the season, and we are not talking exclusively about body health.

Porzingis led the victory with 29 points, 11 rebounds, 55% from the field goal, and 5 triples scored, although he was left blank in the last quarter, east field, the last 12 minutes, which were covered by a huge Tim Hardaway Jr., who was resurrected in time to score 13 points in the fourth quarter and finish with 19.

Meanwhile, Luka Doncic added 23 points, 8 rebounds, and 11 assists, with a 9 of 22 on the pitch, and Jalen Brunson shone again, his season! With 17 points and 6 assists. Good work, also, in defense of Reggie Bullock, who is gradually adapting to his new team.

In the opposite ranks, Jokic, Jokic, and more Jokic. The Serbian is an unapproachable player today on the part of the opposing defenses. His radius of action is so great and so varied that it is hard to believe that one day in and another also the great star of the Nuggets is not founded, more now, a moment in which his team plays without Jamal Murray, Michael Porter Jr., and Will Barton.

Another day at a different player’s office. Jokic added 35 points, 16 rebounds, 6 assists and 15 of 26 in the field goal, giving another basketball clinic. He supported his team whenever he was on the pitch, of course, because every time the Serbian has to sit in the band it is a tragedy for his squad. It happened early in the fourth quarter, and that’s where Denver practically lost the game.

At the end of the third quarter, the Nuggets were leading 79-83. The last period began with Doncic and Jokic resting, with a brawl following an incident between JaMychal Green and Frank Ntilikina and with a partial 14-2 without Jokic on the track for 93-85, with the aforementioned resurrection of Hardaway Jr. And by the time the reigning NBA MVP was back on track, almost all of the fish was sold.

Dallas extended its run to 19-5 to put it 98-88 on the scoreboard with a triple by Doncic and 6 minutes to play, and from there dominance and local control, with some Mavs who had 13 points in the last quarter advantage (111-98), the same as Denver in the third quarter (53-66).

There was no final emotion. That’s why Doncic’s injury becomes even more painful for Dallas.

In addition to a tremendous Jokic, Denver had good games from Monte Morris (17 points and 8 assists) and Aaron Gordon (14 points and 7 rebounds). Austin Rivers started again and scored 12 points, Bol Bol added 7 points in 11 minutes and left us some sparkles (that stopper followed by the mate in the second quarter was his best introduction), and Facundo Campazzo played 9 unproductive minutes with his team at -11 with him on track.