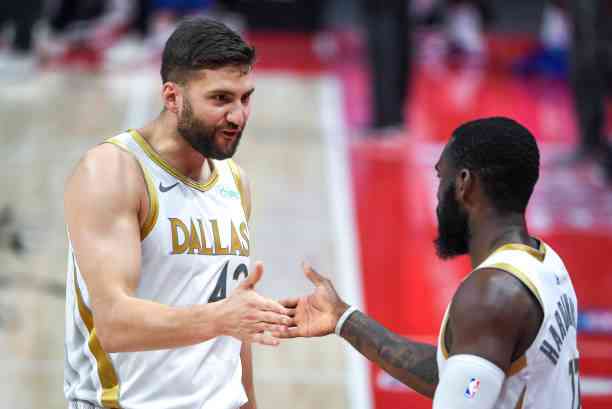 The Dallas Mavericks have won with ease in Miami to pair up again with the Lakers and continue to fight hand in hand with the Angelenos and with Portland to avoid the seventh place in the West that will condemn its owner to play the play-in.

The Texas victory has had a name of its own, that of Tim Hardaway Jr has scored a great game in Florida: 36 points after scoring 10 triples. Those 10 3s equal a player’s all-time record for 3s in a game in franchise history, with Hardaway Jr. equaling George McCloud (10 3s in 1995) and Wes Matthews (10 3s in 2015.

Hardaway Jr. has been on fire in the territory with a long family tradition – his father was a star in his time on the Miami Heat.

In addition to the forward, another very good game from Luka Doncic . Dallas allowed himself the luxury of sitting the Slovenian throughout the final quarter given the comfort of the scoreboard, but in the three quarters he played, he achieved 23 points, 12 rebounds and 8 assists with good shooting percentages, although his great but was in the 7 turnovers he committed and in the defensive loopholes he offered in the first quarter.

Dallas had 19 points from Jalen Brunson, who only played 18 minutes, and 17 from Josh Richardson, who went from low to high, shining especially in the fourth quarter, when all the fish was sold.

The visiting team played without the injured Kristaps Porzingis and without Maxi Kleber, who has discomfort in a very delicate area of ​​the body, the right Achilles tendon.

Miami, meanwhile, could not count on Jimmy Butler (sick, not from Covid-19) and Tyler Herro, while Victor Oladipo celebrated his birthday dressed in the street in the band given his long-term injury.

Erik Spoelstra’s squad is sixth in the East at 35-31, but he can’t sleep easy because the seventh, Boston Celtics, is 34-31 and can send him to the play-in in a season in which the finalists of the past course have had and continue to have many problems to acquire competitive pace.

The final result, 113-127, half reflects the nature of a game that Dallas came to dominate by 26 points (80-106), playing the final quarter against the Heat, who defended poorly throughout the night.

Miami started the game like a shot, with a 14-3 start. He did it with a stellar start from Hispanic Trevor Ariza, who scored 16 points in the first quarter, revealing Luka Doncic on the defensive field.

The first quarter finished 39-30, with Miami hitting no less than 8 3-pointers from 9 attempts. But the best thing about Dallas was its defensive reaction after defending so badly in the first 12 minutes.

That defensive reaction was embodied in spectacular numbers: from conceding 39 points in the first quarter to only conceding 38 in the next 24 minutes! Partial of the two central rooms of the match: 38-68! And there, the game was decided, with the Mavericks stretching their lead amid the offensive heat of Hardaway Jr., who scored 18 points in the third quarter, a quarter that ended 77-98.

The last quarter lacked the slightest bit of emotion. Dallas in control in a game in which the two teams excelled from the triple, with the locals scoring 18 and the visitors responding with 22.

Heat counted as top scorers with Duncan Robinson (19 points and 9 rebounds) and Goran Dragic (19 points), while Trevor Ariza had 18 points in 26 minutes after making 4 triples. After his excellent first quarter he devoted himself more to defensive tasks and barely faced the basket.

In addition, 14 points from Kendrick Nunn and Gabe Vincent and 11 points, 9 rebounds and 11 assists from Bam Adebayo, who was very complete, but little inclined to shoot when the situation would have required a greater participation in scoring.