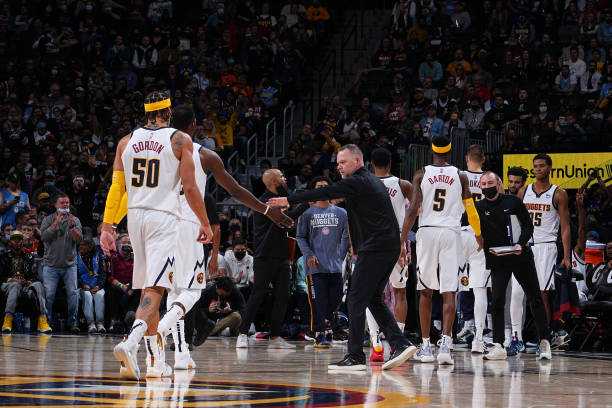 Markieff Morris was sent off for a hard foul on Jokic, and he was expelled for attacking Morris. 113-96 local victory with leadership from Jokic and Barton; Butler is left alone in Miami.

One can do many good deeds in life. But with a really bad one, you can ruin everything. Something like this happened to Nikola Jokic tonight. He played a great game, and his team played at a great level. The Serbian achieved a triple-double. Denver beat clearly. But in the end.

Sometimes you have to start at the end of a match even if it was already decided by then. It is not usual. But the review has to start with what will be discussed more today: the expulsion of Jokic.

The game was 111-94 with 2:39 left. Everything was decided. Then, a player makes the unfortunate decision to ignore the ball. And make a hard foul on Jokic without coming to mind. That player is Markieff Morris. A common suspect. But the worst comes later. The Joker loses the clamp. And it is not the first time that it has happened to him. The warm mood is a Balkan staple product. That’s why it comes out when you least expect it. This time, Jokic goes out of line. I attacked Morris violently from behind. In a dangerous way. And Morris is lying on the floor in a very bad way. Although then, he goes to the changing rooms on his own feet, fortunately. No one can take the fright away from him.

Here is the play in question. Beyond that unpleasant action-reaction, there was a party, and there was local domination. Without Jamal Murray and Michael Porter Jr., Denver passed over the Miami Heat. Comfortable victory: 113-96. The locals won the first three sets to end the third quarter with a 21 advantage (91-70). Miami was always in tow. Never could.

The Nuggets are 6-4. And they do it with remarkable defensive work. In 7 of the 10 games they have played, they left the rival at less than 100 points.

In the game, Denver already took a 17 lead in the second quarter. And he went to rest, winning 64-49. Only Jimmy Butler offered resistance.

The third quarter was definitely killer for Miami. Bad Heat defense from the beginning of the game. Many turnovers. Jam from the triple. Key players on a bad day. Players like Kyle Lowry, Tyler Herro, or Bam Adebayo did nothing in the first half.

Denver was happy to the final sadness at Jokic’s action. The current MVP signed a triple-double: 25 points, 15 rebounds, and 10 assists, with 10 of 14 in the shot. He is a genius of the game, and sometimes he has too much genius. Will Barton also stood out: 25 points, 6 assists, and 7 of 9 from the triple. And in the second unit, rookie Hyland knocked out Argentine Campazzo.

The ex of the Real Madrid fell off the rotation. He played 1 minute and 12 seconds. Even when nobody cared about the game. When the greatness and tragedy of the game were already on social networks.

Butler was the only notable visiting player. He added 31 points and 8 assists. Adebayo had a bad first half. Herro was wrong. And Lowry even worse. The veteran point guard had a night to forget: 0 points with 0 of 8 on the pitch.

Miami is now 7-3. It is a great team that continues to shape its game. Some accidents like this is possible. But he seems to have a well-devised plan.