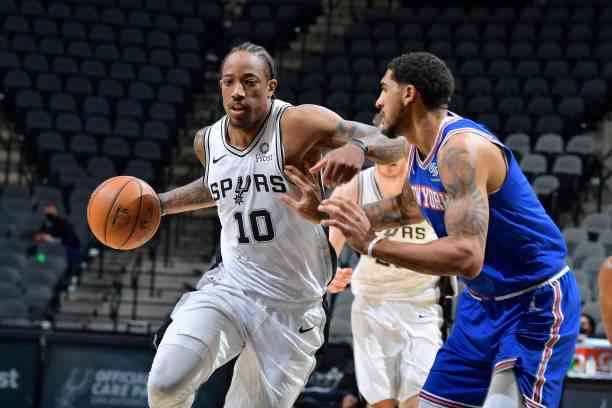 San Antonio beats Dallas 117-119 with a basket in the last second from the forward. The Mavericks ran out of wins despite 60 points scored by Porzingis and Doncic. The bad streak is over. DeMar DeRozan to the rescue of the Spurs. San Antonio is signing a victory in Dallas. Popovich’s team left without a prize the 60 points added by Kristaps Porzingis and Luka Doncic.

There was no other player of the match than DeRozan. He rescued his own twice in the last 74 seconds of the game. First with a 2 + 1 that stopped the winning dynamic of Dallas. And that left Porzingis out of the game. The Latvian eliminated for fouls at that precise moment. There was 1:14 left to go. It was 113-117 for Spurs. And then with the basket that defined the game. The basket that won the visiting team. The maximum joy for his loved ones reached in the last second.

Dallas had come back from 104-112 to 113-114. With Doncic, Porzingis, Finney-Smith, and Richardson in the offensive ointment. Then came that 2 + 1 DeRozan. And goodbye to the Porzingis game. Later there were errors. Until an offensive rebound from Finney-Smith brought Dallas to life. And it made possible an important basket of Doncic. The Slovenian’s shot made it 117-117 with 19.4 seconds to play.

Then came DeRozan’s second moment. The moment of truth. And he solved it with mastery. He stayed in Finney-Smith branded middle distance. It rose. Suspension for shooting. And that shot went in half a second before the horn sounded. Half a second before the game ended in extra time. It was a winning shot. And it could only come from DeRozan. Because he was the second part.

The forward finished the first half with just 6 points. But he scored 27 after the break. He awoke from his slumber in the third quarter. And it no longer stopped. Until finishing with 33 points and 8 assists.

Dejounte Murray seconded him. With 25 points, 4 steals, and 11 of 17 in the shot. Fine Jakob Poeltl and Lonny Walker. The latter struck a powerful dunk against Nicolo Melli. Imposing. Like the one Dorian Finney-Smith planted in Poeltl’s face. Derrick White’s convincing work on defense. However, he had no bellows to attack.

San Antonio finished the game with a 54.2% accuracy in the field goal. His victory served to cut a negative streak of 5 losses in a row. And also to avoid going to zero for the season against Dallas. The Mavs had won the first two games. The 3-0 would have been historic. Something never seen between these two franchises.

Dallas was left with the honey on his lips. Porzingis had 31 points and 15 rebounds. Another great game from the Latvian. It’s sweet. He’s at his best. And Doncic finished with 29 points and 7 assists. He gave a beautiful assist under Poeltl’s legs. He managed to tie the game at 117. And it was impossible for him to work a miracle in the last 5 tenths of a second of the game. It’s very distant launch was impossible. And it stayed at that, impossible.

The Mavs played without Maxi Kleber. And they again had Tim Hardaway Jr. lost for the cause. He only got 2 points. With 0 out of 5 on the pitch at stake. Dallas was on the right track. Defeat is a disappointment. His chase of the Blazers and Lakers cools off.