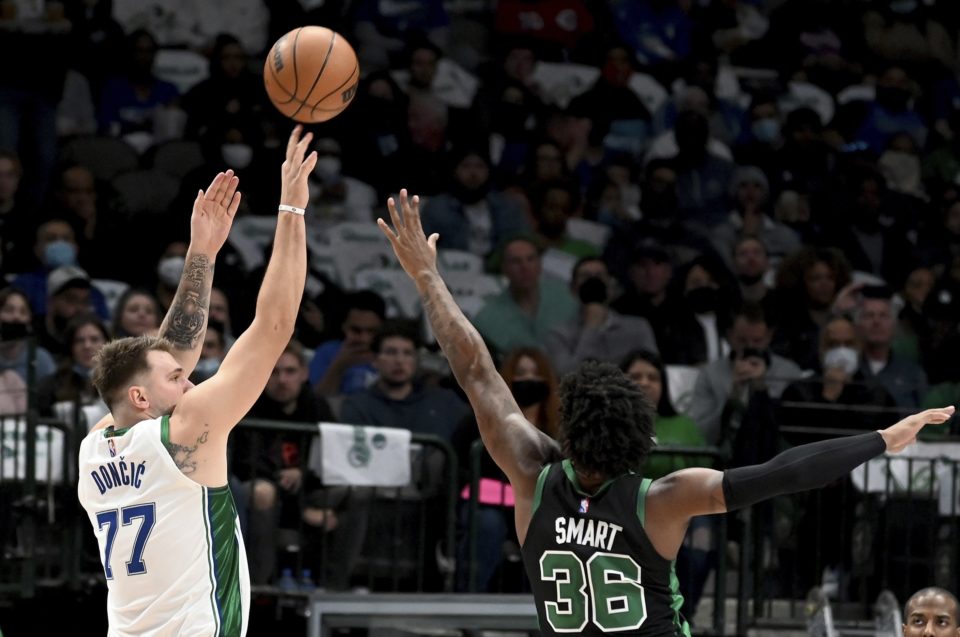 Dallas wins 107-104 with a very good comeback from Kristaps Porzingis. Celtics come back 19 points behind to die on the shore despite Tatum’s 32.

Luka Doncic’s magic is back. After an irregular start to the season and lacking in spark, the Slovenian pulled out of his hat a very good game culminating in a brilliant action that gave the Dallas Mavericks victory over the Boston Celtics.

The game was tied 104-104 with 16.6 seconds remaining, but Dallas had only 10 possession left. The locals served, the visitors defended very well and Boston managed to scratch a few seconds and also lead the Mavs to serve from their track when seconds before they had done it from the rival track. Then, Marcus Smart fouled that prevented Boston’s shot of the match, giving Dallas all the decisive possession. And that’s where Doncic came into action.

With 11.4 seconds to play, the ball for the Slovenian near his basket. The local star bounced into the opposite field, and when he reached the triple he had to channel himself towards the left side, locked in a difficult situation, closely marked by his former teammate Josh Richardson and also closely pressed by Robert Williams III and Marcus Smart. In total, 3 rival players (a trio of good defenders) surrounded him for nothing, because Doncic invented a triple winner on the horn that made the Dallas fans go crazy. Here is the play and the outbreak of the public.

Dallas enjoyed the comeback of Kristaps Porzingis, who had just missed 5 games with back problems. His return was very good: 21 points, 7 rebounds, 15 points in the second half and 8 in the final quarter. Important moment that he starred in the final stretch when he made a dunk for 104-104 and immediately put a stopper. Happy Latvian night.

In addition, excellent first part of the very fit Jalen Brunson and Reggie Bullock match according to his last season with the Knicks.

Boston played without Jaylen Brown, which gave Dennis Schröder the starting job. The best of the team was Jayson Tatum with 32 points, 11 rebounds, 6 triples and excellent shooting percentages. In addition, 20 points from Schröder, 16 plus 8 rebounds from Robert Williams III and a new convincing performance by Dominican Al Horford, author of 14 points, 4 rebounds, and 3 basket passes in 26 minutes.

Josh Richardson played a good game against his former team, but he was the only substitute who cut the Celtics, where Juancho Hernangómez was again out of the rotation. And it was precisely the depth of the bench that gave more revenue to Dallas and less to Boston.

Of course, nothing foreshadowed that the game would reach its end so evenly after seeing the first part. Boston, now 4-6 to Dallas 6-3, had just played two games at a great defensive level, but in the first half against the Mavs, it barely offered hints of that recovered defensive tone.

Dallas started the game winning 17-5 and prevailed in the first quarter 29-15 against a dismal Celtics in attack, who trailed by 19 points in the second quarter to go into halftime falling 57-40.

The first part was the territory of Luka Doncic and Jalen Brunson, with the Celtics exercising in a terrible way from the triple (2 of 17), betting very little on collaborative play and falling apart in the comparison with the substitution of Dallas, which in the first half had 25 points for 8 that of Boston.

Very different was the start of the second half. 4-19 partial that allowed Boston to get into the game. The Celtics looked like another team, and the game looked like another game. The visitors made up for their sins by returning to their best defensive version and the game already moved from this third quarter on the equality that the first two quarters had not had.

The visiting defensive improvement, their much better performance from the triple, and the offensive momentum generated by Tatum and Schröder in the third quarter helped Boston to fight for the win.

A triple by Marcus Smart advanced Udoka’s 102-104 in the final stretch of the match. Boston had come back from a 19-point deficit. But it did not finish. Porzingis’ double matte-stopper action and Doncic’s brilliant resolution struck down a Celtic comeback that didn’t win.