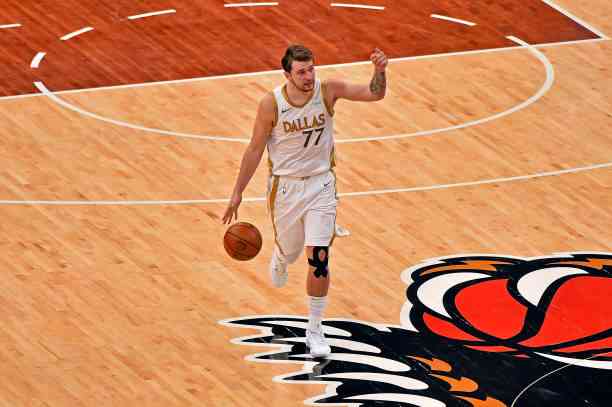 Not even gravity can come with Luka Doncic. Gravity seemed to lead the Slovenian to fall to the ground in the last and decisive play of the game, but the Mavs star, far from falling, gave the crowd an impossible triple to defeat the Grizzlies.

Double conjunction of almost magical court occurred. With 113-111 on the scoreboard, Grayson Allen missed 2 crucial free throws with 2.2 seconds remaining. Allen had played a fantastic game and is a guy who this season was close to 91% correct from the penalty line. To the surprise of locals and strangers, he missed the free 2, and Dwight Powell captured an essential rebound to keep his team alive.

Dallas timeout with 1.8 seconds left. Take out the Texan team to force extra time or win the game. And the miracle happens. Ball for Doncic, he seems to stumble, and when he is half falling, he invents a triple shot that way, with his body very far from the perfect alignment, forcing his wrist because he cannot even fix his eyes on the ring and the ball goes in cleanly an instant before the horn signals the end of the match! The referees review the play, which is on time, to see whether or not Doncic was stepping on the line. It seems obvious that it is a triple. This is how they mark it. Dallas has won!

Luka’s teammates, who had already raised their arms smiling when taking the shot, surround the Slovenian, hug him and form a circle to take triumphal jumps. Before, while awaiting the arbitration decision, Mark Cuban squeezes Doncic passionately. The Grizzlies, meanwhile, are in shock. After putting the triple Doncic, Jonas Valaciunas and Grayson Allen look incredulous and resigned, while trying to digest what has happened. They cannot explain it.

The unusual triple scored by Doncic is worth seeing from all angles.

In this amazing way, the Mavericks beat the Grizzlies in extremis in a game that measured two potential rivals in the new play-in.

Dallas, which was in tow for Memphis most of the game, thus achieved its 30th victory of the season (30-24) to leave the Grizzlies at 27-26.

The Texan team had back Kristaps Porzingis, who did not play the previous game, and he noticed it well. The Latvian seconded Doncic with 21 points, while the Slovenian had 29 points and 9 assists after scoring 4 points in the first half and 25 in the second.

Also, good participation of the second unit of the Mavs, with good roles from Dwight Powell and Tim Hardaway Jr. , with excellent game once again from Jalen Brunson (8 points, 8 rebounds, 9 assists and 4 of 5 shooting) and with improvement of the newcomer JJ Redick (9 points in 15 minutes with 3 of 4 from the triple).

Memphis had as best men Grayson Allen (23 points and 6 triples), who shone tremendously in the first quarter and faded in the 2 decisive free practice he missed (a real shame because it would have deserved another final), and Jonas Valanciunas, author of 19 points and 15 rebounds. Ja Morant had 17 points and Dillon Brooks, 15.