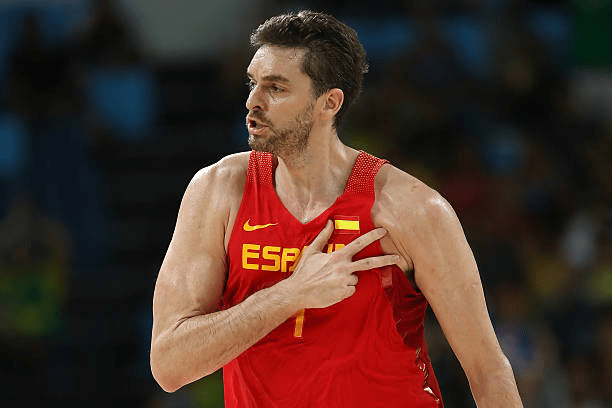 Pau Gasol said goodbye to his professional career, retired from basketball at 41 years old, and with two championship rings in the NBA with the Lakers.

This October 5, 2021 will be one of those sad days in the history of professional basketball. After 23 years wasting talent in the NBA and in his native country, Spain, Pau Gasol’s sports career comes to an end with Barcelona.

At the age of 41, and together with his brothers, including Marc Gasol and his parents, Pau Gasol gave a press conference at the Liceu in Barcelona. He announced that his professional career was over, and he couldn’t help the excitement at ending his successful career.

“I am retiring from professional basketball. It is a difficult decision, but it is considered. You have to change gears and know how to enjoy it. I wanted to end up playing and enjoying. I didn’t want to end up with crutches and an operation“, were Pau Gasol’s first words about his retirement.

“I am grateful for, before I left, to have been able to win a League with the team in which I began to play when I was 18 years old,” he added. Barcelona signed him in 2021 to return to the culé team that saw him debut as a professional in basketball.

Pau Gasol’s decision was not easy, but he had set goals that he had to meet before his retinue. First, in 2019 he had an operation on his foot, which did not let him play with Portland, in fact, he doubted if he could play again after a second operation on that foot.

His family, one of the most important pillars in his professional career, and he still had one wish to fulfill, which he was able to do before making his retirement official: “I had the illusion of being able to play against my daughter, we worked for that .”

Pau Gasol entered the NBA draft for the 2001-2002 NBA season and was chosen with the pick. The Memphis Grizzlies was the team that brought the Spanish into their ranks, there began a long road that would end in a living basketball legend.

From 2001 to 2008, he was with the Grizzlies, but life would have something bigger for Gasol. He was transferred to the Lakers from Kobe Bryant, in which he achieved a stage full of success with ‘Black Mamba’, which ended with two NBA championships.

He was with the Lakers for six years and then went to the Chicago Bulls, a team he was with for two years, and later went to the Spurs from 2016 to 2019. His NBA career ended with the Milwaukee Bucks in 2019, it was his last team in America.

There are many titles that Pau Gasol can boast of, either with his teams and with the Spanish National Team, in which we can count two silver and one bronze medal in the Olympic Games, World champion in 2006 with Spain. Three-time Eurobasket champion.

He was Rookie of the Year in 2002 with the Grizzlies. The Spaniard has two NBA rings, both with the Lakers. Three times league champion with Barcelona, ​​once a champion of the Copa del Rey and once a junior champion of Spain, also with the culé team.

His friendship with Kobe Bryant

During his farewell speech, he could not forget his great friend Kobe Bryant, whom he met during his time as Laker. The late basketball player was one of the teammates that Pau Gasol will never forget and he dedicated some emotional words to him, so take out your handkerchiefs.

“I wanted to make a special mention of my partner Kobe Bryant, who I would very much like to see him here, but that’s life. Life is very unfair sometimes, we miss him and his daughter Gigi a lot, but he taught me to be a better leader and competitor. What it meant to be a winner. I’ve always thought of him as a big brother, so thank you Kobe. “I am not crying, you are crying.