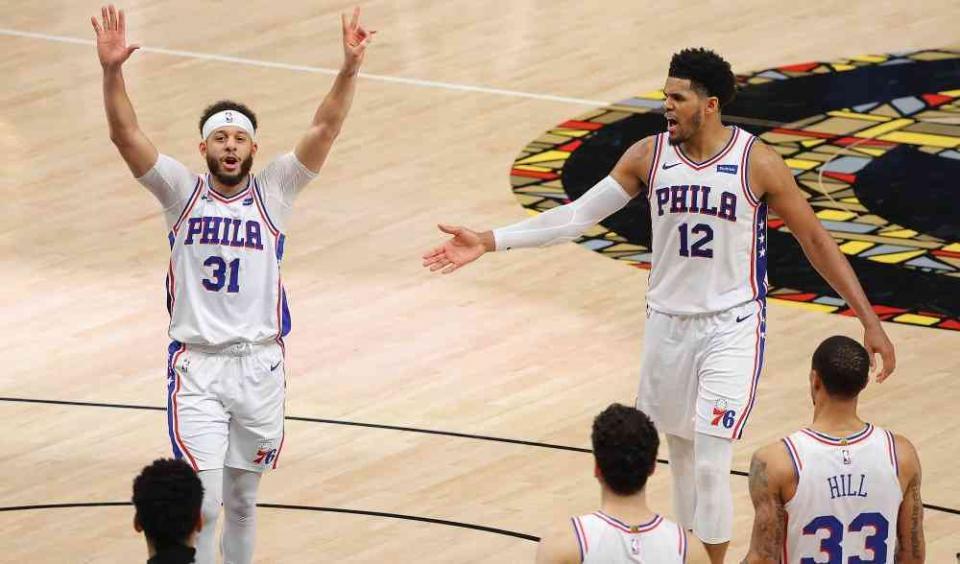 Sixers beat Atlanta 99-104 to make it 3-3, and the series will be decided in Philadelphia. Harris regains the north, Curry continues on a roll, and young Maxey ends up being the X factor.

It was a basketball-laden and tension-filled game that was spectacular at times and ended with an unexpected guest: a power outage with 1:59 remaining, and the result was 93-94 in favor of the Sixers!

It would be necessary to search a lot if the precedent exists to see how in a game that may be the final one in a playoff series, the power goes out when the two teams are playing everything.

Atlanta had signed a 9-2 run culminated with a triple by Trae Young to put that 93-94 and lead the final two minutes of the game with a positive trend, with winning momentum, and that was when the State Farm Arena went dark at first and then be illuminated with thousands of cell phones on the stands. An unusual image at a key playoff moment.

From that break, the positive local trend stopped. The Sixers recovered their best criteria until they won 99-104 thanks to their excellent defense (a defense with which they permanently denied the rival triple in the final stretch of the game) and their success from free practice in the final seconds, with Tyrese Maxey and Tobias Harris as players. He endured the maximum pressure and responded wonderfully.

Harris finished the game with 24 points, Seth Curry made another 24 after hitting 6 triples of 9 attempts (excellent his third quarter), Joel Embiid added 22 points and 13 rebounds, but with 9 of 24 on the shot and 8 turnovers, and Tyrese Maxey added 16 points and 7 rebounds, being a key player. Bad Ben Simmons one more time.

In Atlanta, 34 points, 12 assists and 5 triples from Trae Young, a great driver of his team throughout the game, but this time lacking in resolution. It was wrong at the decisive moment. Kevin Huerter had 17 points, 11 rebounds and 4 assists (only 2 points after the break), Danilo Gallinari added 16 and Clint Capela, 14 plus 11 rebounds.

The Hawks missed a great opportunity. They played at home, they had a game to access the Eastern Finals, they had managed to deactivate Ben Simmons in the series and this time, they faced a Joel Embiid in a minor key that the referees did not respect much.

The locals could hope that Tobias Harris would be reborn, as he was, that Seth Curry would continue with his spectacular offensive streak, something that also happened, but perhaps they did not expect the fantastic performance under pressure from Tyrese Maxey, this boy has an overflowing personality, the injury in the last quarter of Bogdan Bogdanovic, who could not play due to a knee problem at the moment of truth, or the unfavorable performances of players like Lou Williams, John Collins (despite his brutal poster in alley-oop to Embiid ) or Kevin Huerter, who made a formidable first half and disappeared in the second.

This time the game was very different from the previous ones. No heroic comebacks. Quite the contrary, Atlanta started as a shot driven by their fans and started 20-8, but their dominance in the game throughout the first half barely translated into the score (51-47).

Trae Young had made an immense first half, Huerter had supported him in a big way and Clint Capela had surpassed a Joel Embiid that had nothing to do with previous versions, an Embiid who had been unable to overcome the fantastic defensive aids that had loomed on him and that he reached the break with 4 of 11 on the shot and 5 turnovers.

Meanwhile, Ben Simmons, a player reduced to rubble in this series, had only played 9 minutes in the first half after making 3 fouls. And then, already in the last quarter, he would get 5 fouls, they would start Hack-a-Ben and he would end up playing handball style: going out to defend and retreating to the band when his team attacked. A ruin.

Returning to the end of the first half … Rest, the third quarter began and everything changed. Sixers made 4 3-pointers in 2 minutes and endorsed Atlanta on a 0-14 run with 11 points from a fiery Curry to get 51-61 after not being ahead on the scoreboard throughout the first half, an advantage that shortly after would reach 11 points (57-68).

From there, local reaction. Brutal alley-oop Young-Collins in Embiid’s face, partial 17-7 to get 74-75 and end of the third quarter with a tight 76-80.

All to lead to a last quarter of a heart attack that this time Sixers handled well, a handling that allowed him to survive in the competition when he was on the verge of elimination. Doc Rivers saves face and the Sixers-Hawks series will be decided on Sunday in Philadelphia.