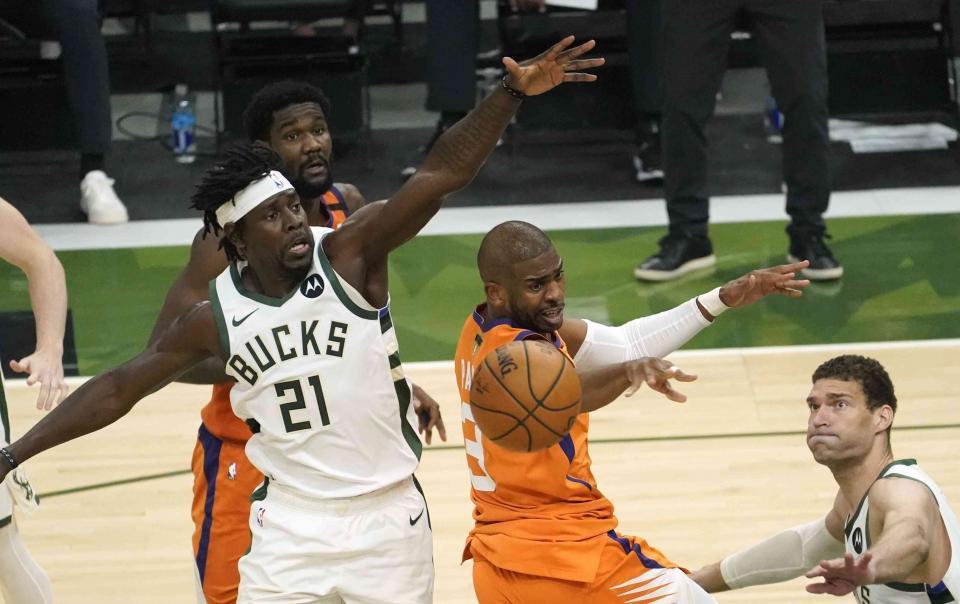 The fourth game between the Milwaukee Bucks and Phoenix Suns turned out to be the most physical; Khris Middleton put an order with 40 points.

The Milwaukee Bucks were against the wall at the start of the series, took the air in the third game, in front of their fans, and in the fourth game tied 2-2, so we will have at least a sixth game, and all thanks to Khris Middleton, who was the guide of the comeback with 40 points, six rebounds, and four assists, with which the Phoenix Suns fell 103-109.

The Bucks found a different version of the Suns from the third game. They suffered more resistance and actually ended up tied at halftime 52-52, but in the end, Chris Paul’s inaccuracies and low production at the hoop took their toll on Devin Booker’s best night.

This result guarantees that the series will return next week to Milwaukee for game six, but it smacks of this being defined in the seventh matchup.

Devin Booker, the player who is soon leaving for Tokyo to face the Olympics with the United States, made the game of his life with 42 points, one rebound, and two assists. It all went to Booker in game four, so Milwaukee’s arena went silent.

His performance was combined with low production from the rest of his team, and in the final quarter, all sins were paid for with Khris Middleton, who found the hoop in the final three minutes.

Did anyone see Chris Paul?

Maybe he’s saving himself for the return to Phoenix, but Chris Paul had a pretty weak performance in several ways. He erred on the side of inaccuracies, not only of marksmanship, but he lost several balls.

In the third quarter, he looked desperate, and it’s no wonder, as he barely recorded two points, three rebounds, and five assists. Even bench players, like Cameron Johnson, had higher production than the Phoenix star. In the end, Chris Paul closed the game with eight points and five turnovers.

When is the fifth game?

Although there will be a three-day break before it, the series returns to Phoenix, so the fifth game will be played on Saturday at 8:00 p.m. Giannis Antetokounmpo will once again fall prey to Phoenix fans on free throws.