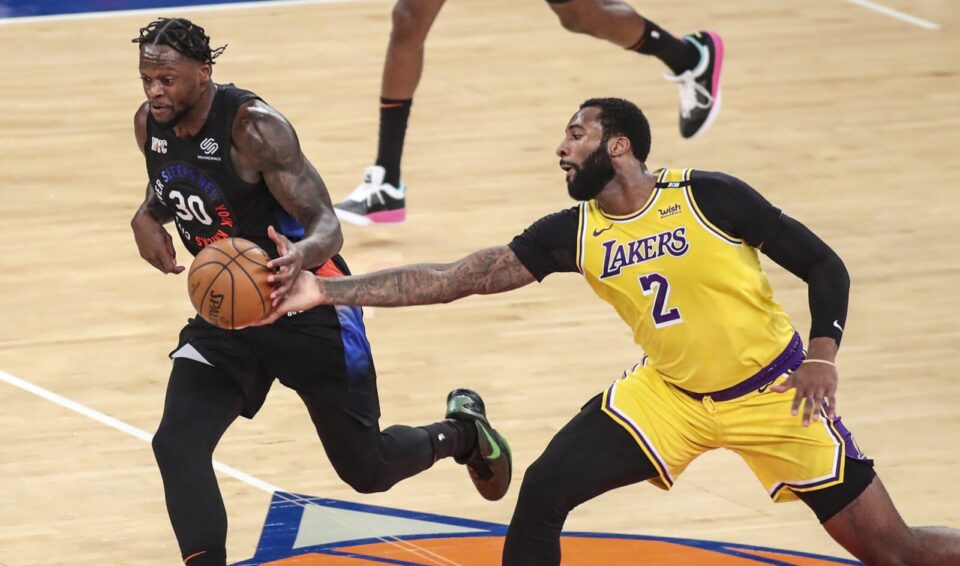 Lakers lose 25 balls to New Yorkers on a bad offensive night. After the happy drunkenness against the Nets came the unhappy hangover against the Knicks. The double New York experience of the Lakers was very different. It went from a thunderous victory with 19 triples to a grey loss with 25 turnovers.

Losing 25 balls goes to a few places. A disaster of such caliber in such an important facet of the game can only lead to defeat the vast majority of the time, as it happened today. The Lakers did not defend poorly (they were not at the level of other games either), but their offence was a shit. Not to mention the boards.

The Lakers held out until halftime thanks to the Knicks’ horrible performance from the triple (1 of 11 in the first half), but then they proved unable to bear the New Yorkers’ physical demands.

A disastrous game between the two tall men who are now a reference in the Lakers: bad Andre Drummond and bad Montrezl Harrell . Between the two, they added 3 points after totalling 40 minutes of play! A very dilapidated ruin. Marc Gasol, who returned to the game to only be on the court for 5 minutes, scored the same points, 3, as his two teammates together, which says little in their favour.

Faced with the Lakers’ interior shortage, excellently defended by the Knicks, the local team had in its ranks the most dominant player of the game, Julius Randle . The former Lakers was cruel to his former team: 34 points and 10 rebounds. The only one but on his great night was his 7 turnovers. But beyond that, Randle was undoubtedly the man of the match.

Knicks also had 20 points from Elfrid Payton, 14 from Derrick Rose in 20 minutes of action and a very good job from Reggie Bullock.

Thibodeau’s men survived their horrible exercise from the triple (5 of 27) and Barrett’s bad night. They supported those burdens with defense, a lot of defense, and with power on the rebound. Badly the Lakers, we must insist, on the boards.

The Lakers were in tow and without options. Well, he did get a glimpse of a final option of sorts as he got closer to 92-87 with 5:14 left, but the sales came early, and in a flash, Randle sank Los Angeles hopes. Partial 8-0 with Randle as the main protagonist, 100-87 on the scoreboard, all the opposition from Vogel’s team ended , which is now 33-21.

The visitors had Dennis Schröder with 21 points and 6 assists, Markieff Morris with 17 points and Kyle Kuzma, who did not discover gunpowder this time, with 14, a Kuzma who returned to the game, as did Wes Matthews and the now marginal Marc Gasol.

The Knicks, who have been on the right track in recent games, are 28-27. Positive. Something unexpected at the start of the season.