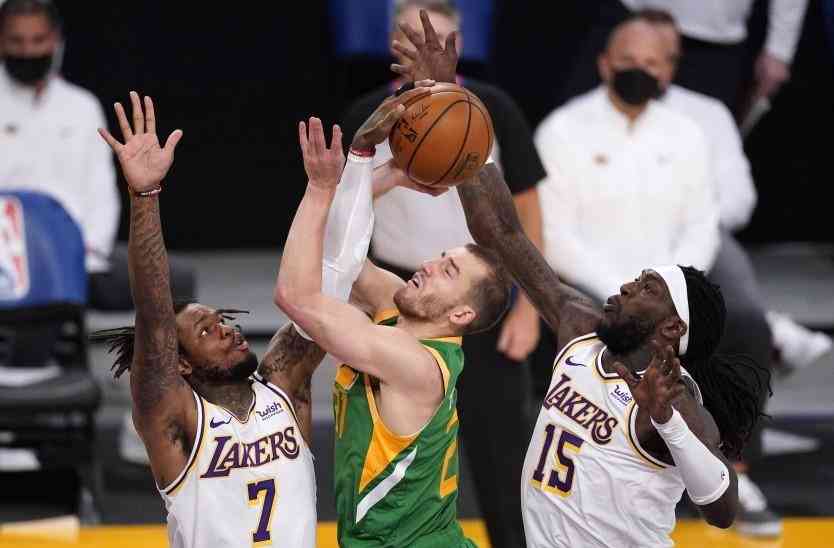 Schröder takes the game into overtime, and the Lakers win the extension 17-5. Lakers play without LeBron and Davis; Jazz does it without Mitchell, Gobert, Conley, and Favors.

The Lakers beat Jazz 127-115 in overtime in a game with blinding casualties on both sides. The Angelenos saved the game with a basket from Dennis Schröder, their best man against Jazz, who took the game into overtime in which they were far superior.

What could have been a spectacular duel at the summit turned into an appreciable duel at ground level. The season starts to get very uphill for almost everyone, and casualties begin to poison the competition.

The Lakers-Jazz casualty list couldn’t be more depressing. Lakers were playing without LeBron James and Anthony Davis; Jazz performed on the track without Donovan Mitchell, Rudy Gobert, Mike Conley, and Derrick Favors. Too hard to digest.

Those casualties were especially tough for Utah, which ran out of inside play and presented a very short second unit of quality. In that sense, the Lakers ended up asserting their greater depth as a team, with the luxury of having Marc Gasol without playing a single second.

The good thing about this sport called basketball is that some jewels can be extracted from the hardships, and this game, in its way, was certainly entertaining, intense, and exciting, with two radically opposite ways of approaching the game as a result of the losses of some and others.

Lakers recovered, among others, Andre Drummond, and Jazz did not have a single player to oppose Drummond with Gobert and Favors out. The incumbent in the job was Ilyasova, whose quality no one will doubt at this point, but whose ability to contain a pure center like Drummond is quite limited. But to make up for that hole.

Ilyasova hit 5 3-pointers in the first quarter in a spectacular outdoor display! Beyond that beginning, the Lakers exploited their inside game, and Jazz lived off his outside shot in a game that began with a full-fledged offense and few defenses and gradually led to much tighter defenses. The Lakers left the Jazz at 20 points in the third quarter, and the Jazz left the Lakers at 16 in the last from a zone defense that overwhelmed Frank Vogel’s team.

In fact, Lakers left the third quarter winning 94-82 and got to be 14 up in the last, but it was of no use to them. Utah went ahead 98-100 with a triple by Joe Ingles, his game spectacular, with a 4-18 run in the fourth. From that moment on, equality, with the Lakers trying to overcome that zone defense that was causing him real headaches.

The ending turned out to be more than interesting, with Dennis Schröder really leading this time, saving the Lakers’ situation with a wonderful resolution ability. The German scored 6 points in the last 75 seconds of the final quarter, including those that forced extra time!

A triple by Jordan Clarkson had put the Jazz with an advantage (108-110) with 8.7 seconds left after the time-out requested by Snyder and a great penetration by Schröder through the center of the zone, beating Royce O ‘by speed. Neal tied the game at 110 with 3 seconds remaining.

The extension was another story. Lakers’ dominance was overwhelming, with Schröder, Drummond, Kuzma, and Caldwell-Pope laying the foundations for the win with a tremendous 17-5 in the extra 5 minutes for the final 127-115. Yes, the Lakers scored more points in the 5 minutes of overtime, 17, than in the 12 minutes of the fourth quarter, 16! The Angelenos’ wardrobe was noticeable compared to those of Salt Lake City, who did nothing but miss outside shots in overtime.

Schröder took Ilyasova out of the game in extra time when the Turk committed his sixth foul, and KCP had to leave the court in full personal ecstasy when a calf was raised on him as a result of his physical waste.

Lakers won with 51.6% in shooting, logical and indisputable dominance of the rebound, and good defensive moments. Jazz lost despite his very effective zone work and 23 3s (he broke the NBA record for 3-point attempts this season with 59).

Utah is heavy with overtime this triumphant season for the team. You still don’t know what it’s like to win one.

Date And Times For The NBA All-Star Game 2021