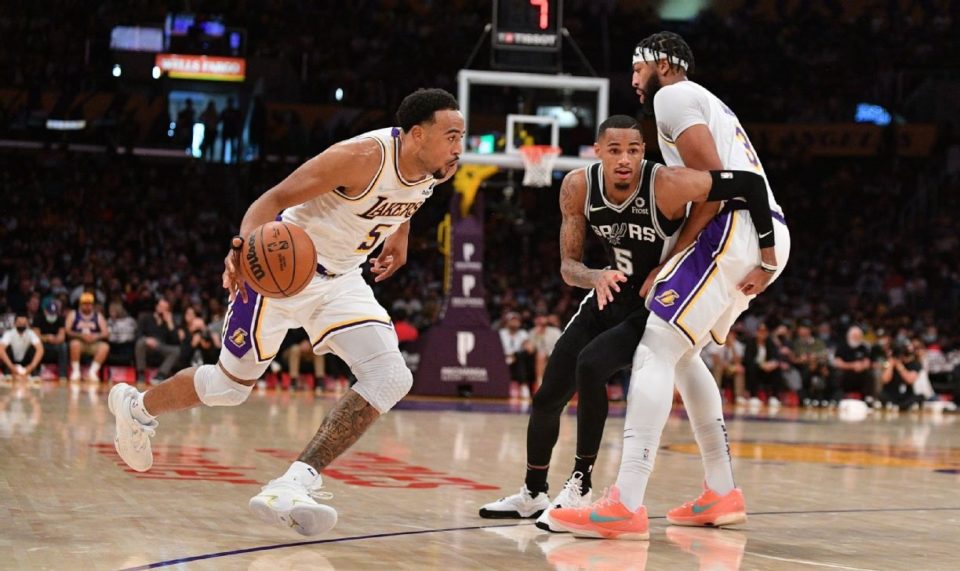 Lakers recovered the injured Talen Horton-Tucker, placed Carmelo Anthony as a starter, enjoyed a great Anthony Davis, defeated Kent Bazemore, benefited from very good work from some of his secondary players, overcame his bad habits in the third quarter and he knew how to define against Spurs, even if it was at the last moment. But despite all this, he struggled again against a lower squad, although nothing to do with the difficulties experienced in other games.

Sunday’s victory for Frank Vogel’s team (114-106) gave a break to some players who were being dragged to a very uncomfortable place. A victory that puts the Lakers at 8-6, which is not much given their a priori simple schedule, which has included 11 home games to date and only 3 away. The balance of the Californians following the loss of LeBron James is now 3-3.

Spurs were close again, as they were on October 26, when they fell in overtime to the Lakers in a game that came almost in their hands.

This was different because throughout the second half the locals dominated the scoreboard reaching a 14 advantage and never losing control of the light, although it is true that it costs a world for this team to close the matches, already Let’s not say break them ahead of time, something, the latter, which today is science fiction for Lakers players.

The locals had rookie Horton-Tucker with 17 points, Carmelo Anthony with 15, and Russell Wesbrook with 14 points, 11 rebounds and 7 assists (7 losses also), among the starters. With Russ shooting 3 well and the Lakers having a +11 with him on the court. And among the substitutes, it is worth highlighting the 16 points of Malik Monk and the 15 of Wayne Ellington (5 of 7 in triples). But above all of them was the figure of Anthony Davis.

Because Lakers enjoyed a very good version of Davis: 34 points, 15 rebounds, 6 assists, and 14 of 24 shooting. ‘La Ceja’ made an extraordinary first quarter (19 points) and went into halftime with 27 points to his credit, with Lakers winning 60-55 in a first half in which everything went through Davis, excessive dependence on power forward that Vogel and his coaching staff tried to file successfully during the break.

The best thing for the Angelenos was to verify that this time they did not play in the third quarter. The team did well and soon acquired a scoreless cushion from Davis, with Russell Westbrook (hit from 3), Carmelo Anthony and Talen-Horton Tucker pulling theirs on offense.

Of course, these Lakers’ defensive seams open very easily, which San Antonio took advantage of more than once, especially when it placed Thaddeus Young as a false 5 , who normally finds it difficult to define facing the rim as a scorer, but It is very easy for him to see the game in his head both in attack and defense.

A very good Dejounte Murray (triple-double with 22 points, 10 rebounds and 10 assists) and the success of Keldon Johnson (24 points, with 6 of 9 triples), as well as the games of the young Devin Vassell (19 points, 7 rebounds and hit from the perimeter) and the aforementioned Thaddeus Young (17 points and 9 rebounds in 26 minutes), made San Antonio never lose his footing in the game and always return to the fight after conceding an unfavorable set.

Spurs left the third quarter losing 90-79 to some Lakers who were moving the ball very well, who were 13 of 26 from the triple, who had only lost 2 balls in the entire third quarter and who had a very good work of his second unit, with very good games from Wayne Ellington and Malik Monk, and with a Rajon Rondo (7 assists in the game) who is able to make sense of the offensive game like few players in these Lakers.

The final quarter came and the Lakers seemed ready to finally resolve a game without hurry, ahead of time, with moments to enjoy success without tension. A triple by Monk, a great start to the fourth is his, he put the 101-88 on the scoreboard, but the Lakers, once again, did not break the rival, entering the last 5 minutes with a score of 104-96.

And that’s when Staples fans broke out in cold sweats. Thaddeus Young was doing a lot of damage to the locals, young Devin Vassell was offering a fantastic last quarter and a triple by Doug McDermott made it 105-103 with 2:39 left. Doubts on the track and doubts in the stands, even more so with the precedents of this season.

It was in that delicate moment when the Lakers finally exerted a great team. Local timeout and 7-0 partial to define the game with baskets from Horton-Tucker, Carmelo (triple) and Westbrook after a fantastic combination with Davis’ assistance. There it was all over. And the Lakers breathed, which is not little.