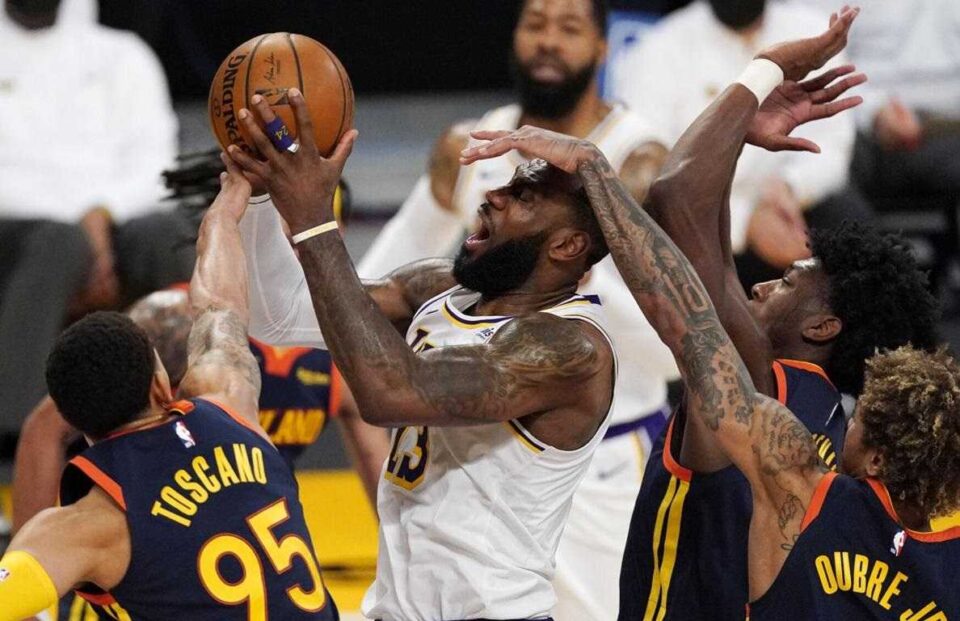 One of the most attractive matches of the day. But it came to nothing. Because there was no match. At least on a competitive level. The Lakers walked from beginning to end. A real sporting feast for the locals. Disappointing Warriors.

Lakers overwhelming victory. By 26 points (117-91). It could have been many more. The game stopped in its tracks in the second half. When everything was decided. LeBron James’ 1,300 regular-season game couldn’t have been more relaxed.

Local triumph with 19 points from LeBron James in 24 minutes. With 13 plus 8 rebounds from Markieff Morris. With 13 others from a very active and complete Alex Caruso. With 12 plus 6 assists from Dennis Schröder. With 12 and 11 rebounds from an insubstantial Kyle Kuzma. Kuzma did little in competitive moments. And with a good game from Marc Gasol . The Spanish added 9 points and 4 rebounds in 16 minutes. The 9 to open the game. The moment when everything was decided.

On the losers … 18 points from Eric Paschall . And 16 points and 7 assists from Stephen Curry. He played 26 minutes. Green only played the first part. And contributing very little. His team noticed. And a lot. The Mexican Juan Toscano-Anderson had 7 points, 5 rebounds, 4 assists, and 2 steals. He was on track for 27 minutes.

Warriors were badly off. And on top of that, he lost Draymond Green through injury. Damage to an ankle. He did not play in the second half. It is not clear if for simple precaution or serious damage. The point is, Golden State was a defensive disaster. He never had an offensive rhythm. And it was, logically, crushed.

He started the game with a 20-5. And there everything is over. With Marc Gasol scoring 9 points in the first 4 minutes of the game! Some rude, defensive misalignments from the Lakers shortly after. But the Warriors defense was rude from the opening jump.

The advantage was growing. At the end of the first quarter … 41-21! With a technique near the end for Draymond Green. With LeBron, Gasol and Schröder leading the party. With Andrew Wiggins missing. With the Lakers shooting an excellent 3. With the Warriors shooting very poorly from the perimeter. Bounce off the premises. And 16 free games thrown by 4 of the visitors. There was no color. When the Lakers ran, he killed the rival. And he ran quite a few times. Thanks to the rebound and losses from Kerr’s team. The Warriors painting was a strainer. A true invitation to the party.

The second quarter, more of the same. The fall of Golden State, without brake. Defensive disaster of those of the Bay. A triple by Alex Caruso. Two free from Schröder. A Horton-Tucker basket. And +29 in the blink of an eye (60-31). A scandal outcome was looming. Little row between Schröder and Curry. With 62-33 on the scoreboard. A nonsensical whistle. At least minimal tension.

The end of the second quarter says it all. Stephen Curry misses a free throw. And then an easy tray. LeBron responds by closing the first half with a triple. Result at half time: 73-44!

Warriors first half to insult. Series of 4 of 17 from the triple. No less than 11 turnovers. No presence on the boards. Shameful defense.

LeBron at 15 points. Markieff Morris in 11. Schröder and Gasol with 9 (the Spanish in 9 minutes). In Warriors, only Curry. Author of 14 points. With the Mexican Toscano-Anderson in 5. After 11 minutes of action. And the game ended prematurely.

The second part, useless. Lakers already reached a 30-point lead (75-45) at the start of the third quarter. Afterwards, maximum of 35 (98-63). Relaxation. Laughter in the band of LeBron and his companions. And triple on the Bazemore visitor’s horn. For 99-69 with which the third act ended.

Not to mention the fourth period. So that? Total relaxation on both sides. A shot in the basketball foot. Result, 18-22. The final honk was a relief. The end of the match was not a match. The end of the Lakers monologue. The end of the Calvary of the Warriors.

Adebayo Resolves The Heat-Nets Over The Horn