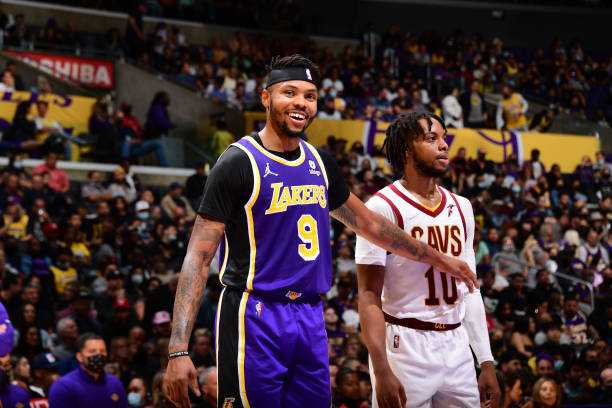 113-101 victory against Cavaliers in which Rubio and Mobley shone.

The Los Angeles team balances its situation (3-3), and James adds a 16-1 against his former team.

The return of LeBron James, the defensive improvement, and the happy night of Carmelo Anthony from the triple allowed the Lakers to ease their situation and take a little respite in this difficult start to the competition they are having.

Victory against Cavaliers who came to Staples Center stoned after beating Hawks, Nuggets, and Clippers consecutively, victory 113-101 after dominating the rival team from the end of the third quarter.

Until that moment, Cleveland had not only endured the face to face with the Lakers, but during phases of the game, it had dominated and controlled the situation.

It was precisely when the visitors were in better health, well into the third act with a score of 76-85 in full effervescence of Ricky Rubio, when the Lakers squeezed in defense and unlocked a 12-0 run to their opponent to close the third quarter winning 88-85, a partial that opened the can of victory and that began with a contribution from Russell Westbrook and continued with a mate from Avery Bradley, the success of Carmelo and the piecework of the young Austin Reaves.

The worst thing for Cleveland was what came next. Bickerstaff’s team went ahead again (90-91 with a trip-shot from Darius Garland on the horn of possession), and from there, Staples boiled with a 15-2 partial that left the light on a 105-93 channel. That is, from that 76-85 in favor of the Cavs, the Lakers chained a triumphant 29-8 run that killed their rival! A set that culminated with a block from Anthony Davis to Lauri Markkanen and a basket from James, whose record in the games against the Cavaliers is already 16-1.

Far were the bad omens offered by the home team in the first quarter, when in the first 12 minutes of the game, they lost 10 balls to end the quarter conceding a 0-13 run. Far behind were the Lakers’ problems on the rebound throughout the first half and their ineffectiveness from the triple (only one scored reached the break).

Lakers went from 1 of 7 from the triple in the first half to 11 of 20 that he scored in the second. A more than substantial improvement.

Carmelo Anthony capitalized on the attack in moments of truth by taking advantage of Lauri Markkanen defending him. Melo went to 24 points in 25 minutes, with 6 of 8 from the triple. Of those 24 points, 18 came after the break.

LeBron, meanwhile, had lights and shadows on his return, but always brings a plus of competitiveness to the team by contagion to his teammates. He had 26 points, gave 8 assists, but was 1 of 10 from the triple and lost 7 balls (in the end, the Lakers lost 20).

In addition, a serious game, without fanfare neither positive nor negative, by Russell Westbrook, with 19 points and 8 of 13 in the shot, and 15 points, 9 rebounds, and 3 blocks by Anthony Davis. Avery Bradley changed his fate, and with him on the track, Lakers made a +30, and the young Austin Reaves offered very good minutes.

Cleveland was very competitive until the final stretch of the third quarter. Rookie Evan Mobley shone again, a true gem, scoring 23 points and making more than one impression dunk. Darius Garland added 18 points and 11 assists, and Ricky Rubio shone with his own light offering high school basketball and doing well again against the Lakers, which is already a classic. He had 18 points, 6 rebounds, 4 assists, and 3 steals in 32 minutes of play.

Markkanen, poor in defense, shone in attack, and the one who did not have his day was Collin Sexton, certainly cloudy against the Lakers.

The Los Angeles team finished with 54.8% in the field goal, stood out from the triple in the second half, had a remarkable second unit, and knew how to close the game very well, offering a very good image in the last 15 minutes of the game meeting.

In the end, a big ovation when at 1:13 left Frank Vogel withdrew his important men from the court and a big hug at the conclusion of LeBron’s game with his former teammates on the Cavs Kevin Love and Cedi Osman.