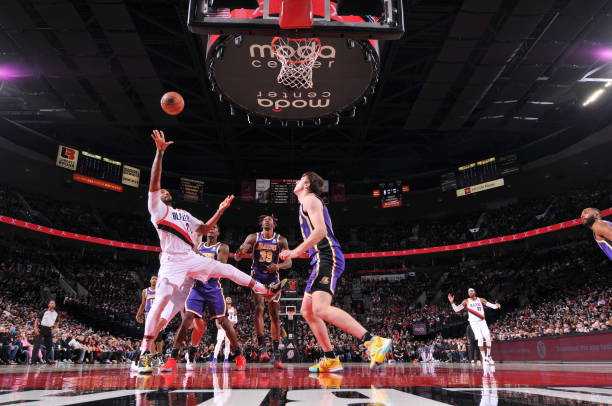 Portland wins 105-90 with Lillard and Nurkic leading with Angelenos losing Davis. Westbrook and Anthony don’t respond well to the challenge of playing without LeBron James and Anthony Davis.

It is difficult to know where the ground of these Lakers is. Each day that passes, the Los Angeles team gives more sense of decomposition before starting to compose. The history of the franchise is not very prone to putting up with the ridiculous. And this team begins to chain them.

Today has been pure makeup. The 105-90 is much more than misleading. Portland was already leading 36-14 at the end of the first quarter. And he had a 34-point lead in the third. To get to the start of the final quarter by winning 93-62. Then came the absolute relaxation. A relaxation that led the locals only to score 12 points in the last 12 minutes. Because the work was already done. The victory could not have been easier.

Lakers played again without LeBron (his face in the band was all a poem). And he lost Anthony Davis at the first trade. He only played 7 minutes. He did not leave because of the injury that he dragged on a finger. He left due to stomach problems. And those who had to take over did not take it. Russell Westbrook was 1 of 13 on the field goal. He lost 6 balls. And he gave away a viral airball. Putting the memes on his haters on a silver platter. Carmelo Anthony paled before his former team: 4 of 14 in the shot. This time the triples did not enter. And without their 4 proper names, these Lakers don’t seem like much.

The Los Angeles team is capable of healing any sick person or resuscitating a dead person. It has at times that unwanted biblical touch if you play basketball. That touch that makes others better. Portland had started the season very badly. Their leader, Damian Lillard, was on the floor. But the visit of Vogel’s was enough for everyone to regain their spirits.

The locals were in a depressive phase and with their president investigated. In addition, they were playing their second game from a back-to-back. But not even for those Lakers took advantage of the situation.

Lillard regained his smile (25 points, 6 assists, and 6 triples playing three quarters). And Jusuf Nurkic took over the boards. What abuse of Bosnian! He had a great time. He had 15 points and 17 rebounds in 22 minutes. He stole 3 balls and did not miss a single shot (6 of 6 on the field).

Powell and Covington reached the dozen. And Portland allowed itself the luxury of overwhelming the opponent on a horrible McCollum night.

Lakers had just won the Rockets and lost against the Thunder. And his first quarter in Portland couldn’t have been more discouraging. A 13-0 run made it 25-10. It was just the beginning of the end. The advantage was growing. At the end of the first quarter: 36-14. The game ended there. The Lakers at 6 of 25 on the field goal. With 0 out of 6 from triple. With 4 turnovers. But mostly without defense.

Only the local defense was encouraged when it took shelter in a zone. It happened in the second quarter. Portland only had 15 points in 12 minutes. But in the third quarter, the Lakers were back to their old ways. And they conceded 42 points. An authentic festival.

At the end of the third quarter (when the game actually ended) Lakers by 31.3% on the field goal. And receiving 93 points. Arguments abound. The team neither attacked nor defended. He didn’t play anything. The local ride was just that, a ride from start to finish. And the bill keeps going up. Lakers games without LeBron James: 13-31. LeBron should take better care of his companies.