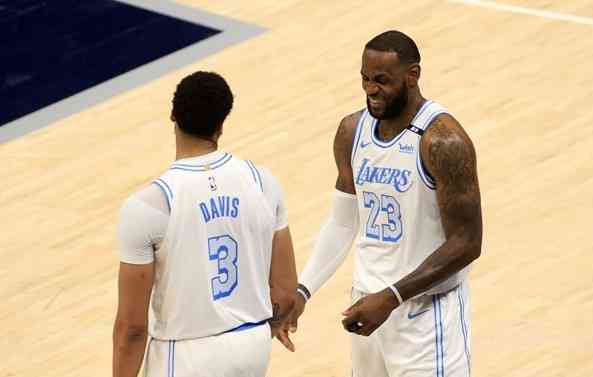 LeBron James returned after missing the last 6 games, and his return was providential for a Lakers who are managing with little brilliance on the tightrope. Victory against some capitidiminished Pacers to say enough.

LeBron and Dennis Schröder returned (7 games out), Anthony Davis played , and these three stars formed the starting five with Andre Drummond and Kentavious-Caldwell-Pope . Seen like this, everything looked luxurious. Even more so when the Pacers played without Domantas Sabonis, Malcolm Brogdon, TJ Warren, Jeremy Lamb, Myles Turner, Aaron Holiday and Edmond Sumner. But not even in this extreme scenario were the Lakers able to resolve on the fast track and lay down to rest a little, what a good need they do.

Yes, Lakers dominated the scoreboard and the game from start to finish and had maximum advantages of 14 points, but they were unable to definitively break the game to be able to live for once in relaxation.

So much so, that LeBron James and Anthony Davis had to return to the game midway through the last quarter with a score of 100-111 in favor of Lakers, and not even with them peace of mind was reached, since Indiana got to put 108-111 after a basket by Caris LeVert that should have been accompanied by an additional shot that the referees did not concede.

Starting with the utmost urgency, LeBron, LeBron and LeBron. Solution that should not leave Lakers fans very calm. Because it was James who took the bull by the horns scoring 7 points in a row that served to refloat a boat, the Lakers, which was already beginning to have a worrying escape route on its waterline.

In the end, 115-122 with Anthony Davis showing off in the first quarter (his game was spectacular) to go into halftime with 22 points and finish the game with 28 points and 10 rebounds. And with LeBron James resolving in the end to finish with 24 points, 7 rebounds and 8 assists in his return to the competition.

In addition, 14 points from Dennis Schröder also reappeared, 13 from Kentavious Caldwell-Pope, who was very good in the third quarter, and 11 plus 15 rebounds from Andre Drummond.

Now, the Lakers come to the last day with the obligation to beat Pelicans, a team that is already on vacation, and the need for Portland to lose to Denver, a squad that does not seem to be interested in winning the game much. If that combination does not occur, the Lakers will have to squeeze even more their physique in the play-in.

Pacers, meanwhile, played a very dignified game, clinging to the game tooth and nail and pulling on the very good performances of a brilliant Caris LeVert (28 points and 12 assists), who can be forgiven for losing 7 balls, and Jakarr Sampson (20 points in 20 minutes).

Doug McDermott had 17 points, Kelan Martin added 15, Goga Bitadze put up 4 blocks (a couple of them followed by Drummond and James) and TJ McConnell gave 9 assists and stole 4 balls.

Now, the Pacers, who entered the game already qualified to play the play-in, can be ninth or tenth in the East.

Lakers did not work well in defense throughout the game, he knew how to run in moments of the first half, but he did not know how to run backward in moments of the second, and he had almost twice as many free throws as his rival, who was hurt on several occasions for the refereeing performance in the fourth quarter, just when the Lakers were at their most delicate.