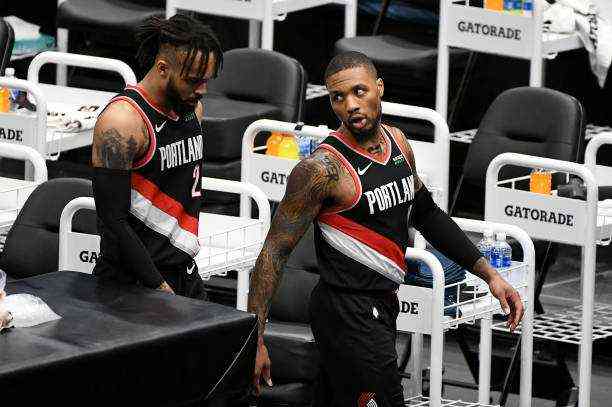 He was half a game frustrated, angry with the refereeing, needing to find his best benefits, and in the end, he left happy, with the triumph of his team, with a crucial triple scored at the right moment. Damian Lillard and his Blazers are still in a sweet moment.

Portland won 118-121 in Dallas despite a new anthology performance by Luka Doncic. The Slovenian is unstoppable. He added 44 points 48 hours after giving the Pelicans 46 (his NBA record).

Doncic presented scandal numbers against the Blazers, with great shooting percentages: 44 points, 7 rebounds, 9 assists, 14 of 20 in the field, 5 of 8 in triples, and 11 of 12 in free. Spectacular his reaction to Derrick Jones Jr.’s flagrant foul, accompanied by some words that the Slovenian did not like. After that action, 11 points in a row. It happened in the second quarter. This is how Doncic spends them when he feels pressured.

Of course, the opposite happened to Luka than to Lillard: he left the game biting his shirt and tapping his head after failing a released triple that would have forced extra time. An error that supposed the definitive defeat of his.

With 118-121 and 6.9 seconds left, the Mavericks pulled out to seek overtime. Blocking Kristaps Porzingis to Robert Covington defender Doncic, leaving the only Slovenian triple to find the equalizer, but his shot did not come despite walking close to it. There the last options of Dallas disappeared, which began to chain victories.

Doncic broke a couple of his franchise records. One by adding 14 games in a row without going below 25 points (he was tied with 13 with Mark Aguirre and Dirk Nowitzki ) and another by scoring 90 points in the sum of two games in a row (Aguirre held the record with 85 points since 1985), but Neither his great game nor the records were of any use to him. The ex-Real Madrid, pissed off went to the locker room, angry with himself, without any capacity to have a little self-indulgence in the face of his final failure.

The Blazers thing is another story. Spectacular team career without being able to count on CJ McCollum and Jusuf Nurkic! The team has already 4 victories in a row and has won 6 of its last 7 matches. A monument deserves Lillard and his teammates, a precise monument is the good of Terry Stotts, top-level coach, as the last years of the Blazers attest.

Lillard led the victory with 34 points, 11 assists and 5 triples, highlighting his third quarter (16 points and 5 assists) -Portland scored 45 points in that quarter- and that triple with which he put 116-119 with 32.4 seconds to play. Then Doncic scored 118-119. And then came the final 118-121 with Carmelo Anthony’s assistance for Derrick Jones Jr.’s dunk. All that was the prelude to Doncic’s missed triple, at which point Portland certified his triumph.

In addition, 17 points from Gary Trent Jr., 15 points, 4 steals and 4 triples without failure for Robert Covington -in addition to his defensive work-, 15 points for Carmelo Anthony on a bad night from the triple and 14 points and 8 rebounds for Enes Kanter.

Portland worked well from the triple and was able to hold the final arreón of Dallas, which with a 12-0 run caused an exciting finish.

In Dallas, in addition to Doncic, 18 points and 8 rebounds from Porzingis and 14 points with 4 triples, one scored for the 116-116, from Dorian Finney-Smith.

The Mavs lived in jerks, ups, and downs that ended up taking them away from victory. They were 0 of 8 from the triple in the first quarter, hit 7 of 3 shots in the second, conceded 45 points in the third, and got into the fight with a 12-0 run in the last. An example of brilliance and inconsistency. A form of play that does not give to easily win a game and that puts the Texan team in trouble every day.