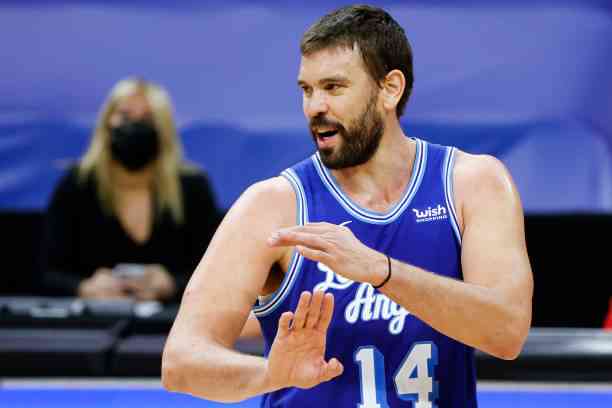 The Lakers win comfortably in Florida with the best Gasol of the season. The Angelenos stand out from the triple, accumulating an advantage of 34 points.

Marc Gasol’s best game this season coincided, on the one hand, with his worst personal moment in the Lakers and, on the other, with the first duel of the season with the team with which he was proclaimed NBA champion in 2019, Toronto Raptors.

Gasol was measured as a visitor to his former team, but it was a strange visit because the game was played very far from Toronto, in Tampa (Florida).

Marc started very well and did not faint while he was on the court, a stay that lasted many more minutes than usual due to a double circumstance: the Lakers starting center, Andre Drummond, is injured, and his theoretical second, Montrezl Harrell, only played 2 minutes because he was sent off in an incident with OG Anunoby, also sent off, in the first quarter.

That gave Gasol time to develop his game. The Catalan finished with 13 points, 9 rebounds, 5 assists, and 4 blocks in 28 minutes after connecting 6 of his 9 field goals.

The Lakers swept the game to end up winning by just 9 points (101-110) against the Raptors without Kyle Lowry and Fred VanVleet. The Angelenos came to be with 34 points ahead in the third quarter (32-66) in full ecstasy of Markieff Morris, after going to rest winning by 26 points (42-68) from a good defensive work and a great success from the triple (13 of 22 in the first half by Toronto’s 3 of 16).

Those of Frank Vogel finished the game with 18 scored triples. The young Horton-Tucker added 17 points and 6 assists. Markieff Morris had 15 points and 9 rebounds. Alex Caruso added 13 points, and Dennis Schröder, 12 points, and 9 assists after scoring his first points when 3 minutes of the third quarter had already been played.

The visitors, who scored 40 points in the first quarter with 9 of 13 from the triple and a powerful performance from Gasol, had a good turnout from their second unit throughout the game and survived their 21 turnovers.

Toronto, meanwhile, had Pascal Siakam with 27 points, but with very poor shooting percentages. Center Boucher finished with 19 points and 8 rebounds.

Is It A Mirage? 5 Points TO Understand The (Almost) Devastating Step Of The Golden State In The Beginning Of The NBA

Dallas Humiliates Portland With Exhibition of Luka Doncic From The Triple