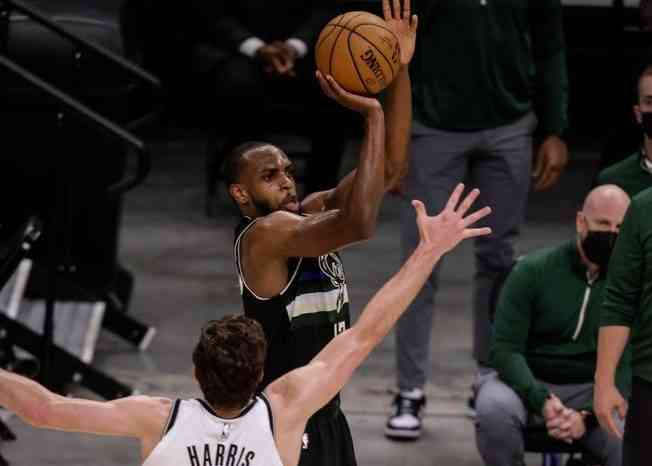 The Bucks prevail 104-89 with Middleton, Antetokounmpo, and Holiday shining on track. A 14-0 run in the fourth quarter breaks a game that Milwaukee always had under control.

Without a superhuman Kevin Durant, without Kyrie Irving in play, and with a limited James Harden, the Nets could not stand up to some Bucks who lived from the on-stage impact of their big three with a wonderful Khris Middleton on the cusp of the productive.

The Bucks saved the match ball they had against them by winning 104-89, making the series 3-3 and forcing a seventh and now final game to be played in Brooklyn on Saturday, a seventh game in a tie in which the 6 Matches played to date have been won by the home team.

Milwaukee controlled the game and the game throughout the night, but could not breathe easy until he broke the score in the fourth quarter with a 14-0 run that put a comfortable 96-77 in the light with 6:24 left of the final.

The Nets succumbed in that fourth quarter to the push of Middleton and Giannis Antetokounmpo (they scored 20 of Milwaukee’s 26 points in the fourth period). But the Bucks began to build their victory when Middleton scored the last 6 points of the third quarter, the last 2 on the horn, to make it 78-67 at the end of the third inning.

The end of that quarter and the beginning of the next and final began to shape a resolution like a roller coaster, with a 10-0 run for Bucks (82-67), a 0-10 run for Nets (82-77) and that 14-0 run immediately afterwards (96-77) that broke the game and that was culminated with a powerful prolonged offensive rebound in a great dunk by Antetokounmpo, who in that 14-0 scored a 2 + 1 and managed to chain 3 free games scored consecutively.

From there, little more. Middleton made a 3 + 1 play to make it 100-79 with 4:45 left, and at that point Steve Nash took Kevin Durant and James Harden off the court, giving up the game.

Middleton had a spectacular performance: 38 points, 10 rebounds, 5 assists and 5 steals with excellent shooting percentages and Antetokounmpo went to 30 points and 17 rebounds, with 60% on the field goal (he did not shoot 3) and putting 6 of his 10 free. The Greek signs his fourth consecutive playoff game with at least 30 points and 10 rebounds, something that only Hakeem Olajuwon, Shaquille O’Neal (2 times) and Tim Duncan had done in the last 40 years.

The third offensive leg of the local triumph was Jrue Holiday, author of 21 points, 8 rebounds, 5 assists and 4 steals, a great Holiday whose only mole was his horrible night since the triple.

In addition, good first part of Brook Lopez and defensive effort of PJ Tucker, getting Budenholzer to win the game without having to burn Antetokounmpo in the defense of Durant, an emergency measure that he has not yet been forced to take.

Fundamental to the Bucks triumph was his outstanding defensive work (Nets scored 19 points in the first and third quarters and 89 at the end of the game), his dominance of the rebound and having gone twice as many times as his rival to the penalty line. All this in a game in which the two teams were quite denied from the triple. In fact, Milwaukee won by 15 points, closing the game with a 7-for-33 run from beyond the arc.

And an important fact in the game shows the different physical degrees of both teams: Milwaukee added 26 points to the rebound and Brooklyn only 4. There are the Nets to avoid running too much.

The Nets, who started the game losing 18-5 and were in tow all night on the scoreboard, were weighed down by the physical slump in the second half by James Harden (14 points at halftime and 2 more later) and Blake Griffin (11 and 1), as well as the inability of Joe Harris to take a step forward and the discreet performance of a Jeff Green who in the previous game had been spectacular.

Durant had to pull the car too much alone in the second half and his team ended up giving up. The forward finished with 32 points, 11 rebounds and 50% in the shot throwing 30 times, although he lost 7 balls. It is still at a huge level, but, of course, the fifth game was a historical anomaly.

The final game will be played on Saturday. The truth is that it promises. Too bad the Nets are in the state they’re in, although maybe because of that, because they’re in that state, we’ll have Game 7 this weekend.