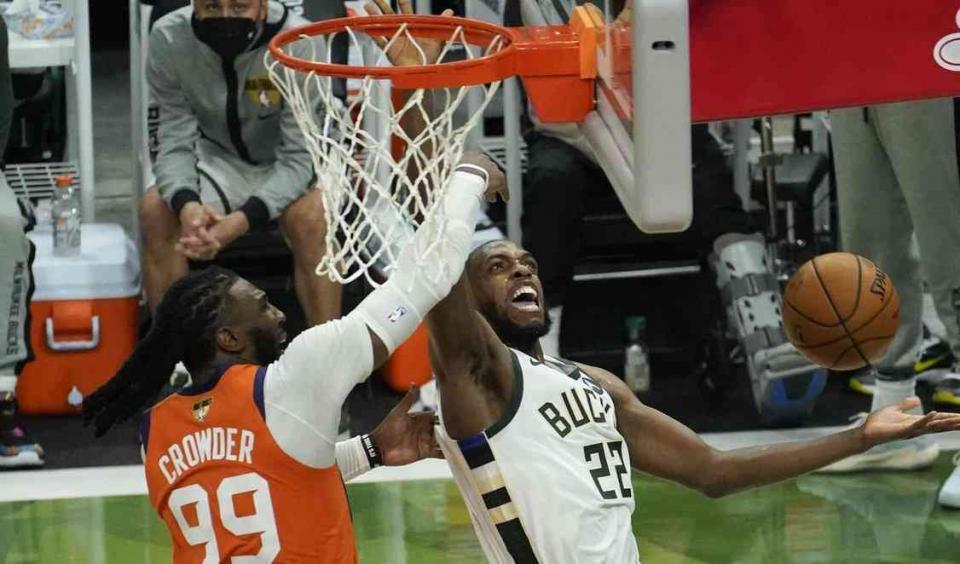 Middleton decides on the home stretch and waives Devin Booker’s 42 points. The Bucks prevail 109-103 against the Suns with a great Anteto and a gray Chis Paul.

The Milwaukee Bucks came out of Game 4 of the Finals alive by beating the Suns 109-103 to leave the series 2-2 on the way back to Phoenix. Khris Middleton was the player who made the difference in the final stretch of the game to boost the local triumph.

Middleton added 40 points, and those 40 points were worth more than Devin Booker’s 42, a true offensive duel that left us the fourth pair of opponents to score 40 or more points in a Finals game. They were preceded by the duets Michael Jordan – Charles Barkley (1993), Jerry West – John Havlicek (1969), and Allen Iverson – Shaquille O’Neal (2001).

Beyond that fantastic duel of the titans, the fourth head-to-head between Bucks and Suns was characterized by equality. Neither team had even a 10-point lead throughout the game. Milwaukee had a maximum advantage of 8 points (109-101 with 7 seconds left), and Phoenix was 9 up (76-85 at the beginning of the fourth quarter).

It was a balanced game that was marked by Chris Paul’s bad night, Devin Booker’s foul problems, who had to leave the game with 3 minutes remaining after committing a sixth foul that the referees overlooked, and by the fantastic ability definition of Khris Middleton, who scored 10 points in the last 2 minutes and 7 seconds of the game, 10 points scored consecutively that practically gave the game to his team in a final in which Giannis Antetokounmpo, who returned to shine, put a memorable block from DeAndre Ayton at a very important moment in the crash.

Middleton and Anteto formed the crucial pair of the encounter. The first one added 40 points, 6 rebounds and 4 assists, took 33 shots from the field and scored those 10 final points that unbalanced the balance. The second was not as super as in the two previous games, but he shone again with his own light by adding 26 points, 14 rebounds, 8 assists, 3 steals and 11 of 19 in the field goal.

The Bucks won despite barely scratching 40% on the field goal and despite being erratic from the 3-pointer. His success from free practice (24 of 29), his dominance once again of the rebound (17 offensive) and, above all, his best steal-loss ratio unbalanced the match. Milwaukee stole 11 balls and only lost 5, for the 3 recoveries and 17 losses of Phoenix, the team that he killed this chapter of the game.

The local Brook Lopez scored 14 points in 19 minutes, showing himself incapable from the triple (his presence on the court continues to decrease), Pat Connaughton was once again the best substitute and the Bucks, with a short rotation of 8 players like the Suns, survived another bad game by Jrue Holiday (4 of 20 on the shot), Bobby Portis’ productive slump and PJ Tucker’s foul problems.

Phoenix was above 50% in the shot, but it was of little use to him, as Booker’s 42 points (38 in the first three quarters) did not serve him, a Booker who concentrated on scoring and was exceptional at the time to damage the rival defense. He finished 17 of 28 on the field goal. He becomes the player who has scored the most points in his first playoffs in all of NBA history.

The problem with Suns is that Booker was very lonely, he was barely accompanied in attack by a very complete Jae Crowder , author of 15 points, 8 rebounds, 3 steals and 3 blocks, and at times, only at times, that fine and elegant player who is Cam Johnson.

Bad game for Chris Paul. Unknown the visiting point guard, who finished with 10 points, 7 assists and 5 losses, a crucial one in the last seconds of the game. He left the crash with 5 of 13 in the shot. A shadow of his best version.

Meanwhile, Deandre Ayton captured 17 rebounds, gave 5 assists, put up 3 blocks … but Milwaukee stopped him on offense: only 6 points with 3 of 9 in the shot. Important to be able to stop the Bahamians.

Milwaukee did not know how to take the reins of the game, but he knew how to hold on very well to it, with triples at moments that were important, such as the one scored by Middleton when Phoenix had scored 73-80 in his favor in the third quarter or like the plugged in by Connaughton when the score was 76-85 right after the beginning of the fourth quarter.

All in a game in which the arbitration was again in question. To give three examples:

A sum and continues in what has been an unfavorable season for the referees.

The Finals are now more alive than ever: 4 games, 4 home victories, 2-2 on the scoreboard, and the fifth game on Saturday.