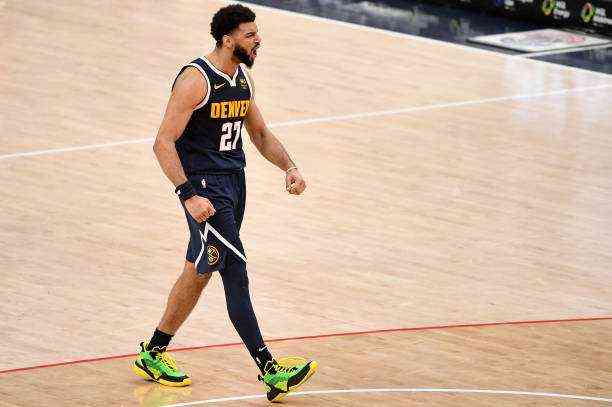 It was Nikola Jokic’s birthday (26 years old), but it was Jamal Murray’s party. The Denver Nuggets point guard made history by becoming the first NBA player to finish a game with 50 or more points without taking a single free throw all night. Never seen.

Unusual statistic, as unheard of was the fact of attending the extreme success in the Canadian’s shot: 21 of 25 in the field shot with 8 of 10 from the triple! 84% success shooting 25 times! No one had scored so many points shooting with that level of effectiveness except for the legendary Wilt Chamberlain. Of course, Chamberlain exerted in his time as a dominant pivot, is that the 21 of 25 today has been done by a point guard who has also thrown 10 triples!

Denver had no trouble winning at Cleveland on a spectacular night for Murray. The Canadian showed extreme precision to go up to 50 points with those paranormal shooting series.

Those 50 points are his best scoring record in the NBA, surpassing his previous record, which stood at 46.

Nothing presaged such an exhibition when in the first quarter Murray made a hideous airball from the triple with no defender within a kilometer around. That wildly erratic shot ended up being just a funny anecdote, because the Denver Nuggets point guard’s night was tremendous.

Watching Murray play, you could say that if he had proposed it, he would have thrown a pitch from the stands blindfolded without caring. And to culminate his performance, he achieved his 50th point through a kill when the game expired, and he was already fully decided. The perfect culmination, as made for the photo.

The Nuggets had Michael Porter Jr. with 22 points (21 in a huge first half), the birthday boy Jokic with a new triple-double (16 points, 12 rebounds, 10 assists, and 4 steals after only throwing 8 shots), and the Argentine Facundo Campazzo completing his fourth consecutive game with double digits in scoring. This time he added 10 points, 3 assists, and 2 steals in 28 minutes with 3 of 5 on the field, and 2 triples scored.

Cleveland, meanwhile, is a team already on the takedown at this point in the season. The Cavaliers accumulate 9 consecutive defeats. They travel aimlessly.

Collin Sexton had 23 points, Jarrett Allen added 20 plus 10 rebounds, and Okoro had 14 points. The team lost 18 balls and put up little resistance in defense.

The Nuggets escaped in the second quarter gradually, at cruising speed, from a flagrant foul by JaVale McGee to Porter Jr., a foul that seemed to light the fuse for Denver to leave his rival lying on the scoreboard until get to 50-69 of the break. Local defense on the ground. Nuggets with 66.7% accuracy in the shot. Porter Jr. (21 points) and Murray (20) already add 41 points, with Jokic at 7 points, 8 rebounds, and 7 assists, with 8 points from Campazzo.

The second part had a little history. Visiting a domain with always comfortable advantages. Result of 80-95 at the end of the third quarter with 30 points from Murray and with Jokic an assist already triple-double.

The start of the last quarter was tremendous. Murray scored the first 13 points for his team and finished the fourth with 20 to reach 50! The rival rim seemed like an Olympic swimming pool for the Canadian, who had fun on the court to unimaginable extremes against a team, Cleveland, which has all the earmarks of heading straight for the draft in the middle of February.