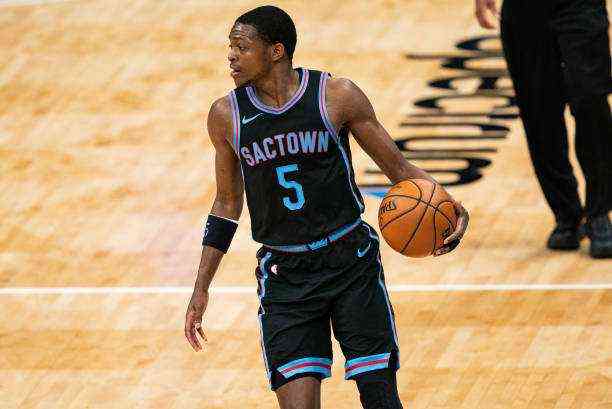 Sweet moment from De’Aaron Fox. The young Sacramento Kings point guard is offering his best game since joining the NBA in the last two weeks, and the culmination has come tonight with his best professional touchdown.

Fox has been a basketball machine in the Kings’ victory (141-119) against the Warriors without Stephen Curry and Draymond Green. The Sacramento point guard finished the game with 44 points, 7 assists, 3 steals, and an excellent 16 of 22 from the field goal. He has been unstoppable.

As unstoppable has been the local attack against some Warriors who have been a drain. Suffice it to say that King has scored 35, 37, 34, and 35 points in every quarter of the game, indicating extreme consistency by Sacramento in its offensive abundance and a permanent discredit of the Warriors defense, a discredit that has spread to the 48 minutes of play.

Those 44 points from Fox have culminated two weeks of luxury and have encouraged the rest of his teammates, who have contributed their own to the victory and the good run of results in which the team is installed.

Richaun Holmes, a player who continues to grow, has contributed 25 points and 11 rebounds, rookie Tyrese Haliburton has gone to 21 points after scoring 6 3-pointers of 7 attempts, substitute Kyle Guy has added 17 points, and Buddy Hield, 16. AND the Kings continue to perform like a charm without Marvin Bagley III.

Sacramento finished with a 60% shooting from the field and shooting very well 3, something that Warriors have also done.

The locals have lost only 6 balls, which speaks very well of their ball control and speaks very badly of the defensive pressure exerted by their rival, which has been zero.

Warriors, who have been planted at the beginning of the final quarter 20 points down, has enjoyed a perfect match from Mexican Juan Toscano-Anderson. The Hispanic player has started due to casualties, has been in contention for 26 minutes, and has achieved 15 points, 6 rebounds, and 4 assists with a 6 of 6 in the field goal that has included a 3 of 3 from the triple. Happy evening for Juan individually.

Andrew Wiggins has had 26 points and 10 rebounds, a great Nico Mannion has had 19 points with 5 of 8 from the triple, Kelly Oubre Jr. has registered 19 points and Jordan Poole, in great form, went to 17. But all this matters little if you do not defend yourself.

In a game without Curry or Green, rookie James Wiseman’s disappointing performance.