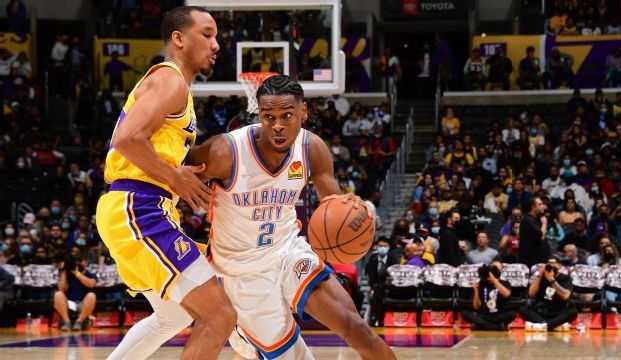 Kind of strange ‘deja vu’. Oklahoma City Thunder has only won 2 games this season, but they have won all 2 from the Lakers! In both cases, the victory was preceded by a great comeback and, on both occasions, with LeBron James in the band, absent due to injury.

That OKC beat the Lakers at home, going back to Los Angeles 26 points behind it seemed a simple and unfortunate accident, that they won again a few days later, this time at the Staples Center, recovering 19 points of deficit already seems something that exceeds any risky prognosis. It’s just incredible, which becomes a little more credible when you consider that the Lakers came from being on the verge of losing a home game to the Houston Rockets, with the Texans taking the last shot to win the game.

Loss by 104-107 of some Lakers who cannot fool anyone with their 5-4, because of those 9 games, 6 have been against Spurs, Cavaliers, Thunder (2 times) and Rockets (another 2), a schedule that would have than to have been a red carpet for the Lakers even while in the process of group construction.

Thunder has shown that he has the guts when it comes to playing a tight finish to the game and that he has a player that the league still undervalued ​​despite being loaded with tall basketball. That player is none other than Shai Gilgeous-Alexander, whose presence at the end of the game was tremendous: he made 2 free throws in the last 3 minutes and scored a tremendous triple from the Curry – Lillard logo gave a fantastic assist for him. Lu Dort’s mate when his team most needed him, in a play in which SGA knew how to read the game and in which the Lakers defense was a disaster. The thing about its triple from the logo is to admire it a thousand times.

Gilgeous-Alexander finished the game with 28 points (11 in the final quarter) and 6 assists. Also vital in the last quarter were Dort (17 final points despite playing with physical problems) and Kenrich Williams, who made an important triple and finished with 13 points and 8 rebounds after scoring 9 in the fourth quarter.

OKC had 6 players on 10 or more points, joining the aforementioned Bazley, Jerome, and Favors, this one with a double-double. Unfortunately, Argentine Gabriel Deck was once again out of the game due to injury.

The visitors were always in tow on the scoreboard until they took the lead for the first time in the final quarter, and they knew how to withstand the pressure unleashed by another dizzying outcome very well.

In that final in which the young Thunder players knew how to temper their nerves, Lakers had an Anthony Davis quite missing, weighed down by an injury suffered when the break was approaching, a Carmelo Anthony in a saving plan, scoring 2 triples that gave life his people, and an unfortunate Russell Westbrook, who lost a ball in a silly way 21 seconds from the end and who missed the final triple that was looking for extra time on the horn.

At 104-107, after showing Dort again that his hand was not shaking from free kick, the Lakers had to attack with 7 seconds left and no time-outs available, ending the play on Russ’ missed shot.

The Lakers defended acceptably during the game – you don’t have to be a paragon of defensive virtues to stop these Thunder – but they conceded 35 points in the fourth quarter.

Anthony Davis finished with 29 points and 18 rebounds, and had to play the second half after damaging a finger in the second quarter; Westbrook added 27 points for the locals; and Carmelo Anthony returned to shine with 21 points (15 from the triple). But no one else made it to 10. A wasteland for the rest of the team. Save, if anything, young Reaves and something for Avery Bradley. The rest, very bad, including newcomer Wayne Ellington.

To the Lakers’ problem of quickly assembling a new squad, they are adding the many physical problems that the squad is presenting. All of that must be considered, but the truth is that the team should have given much more of itself in some games against very fragile teams despite these burdens.